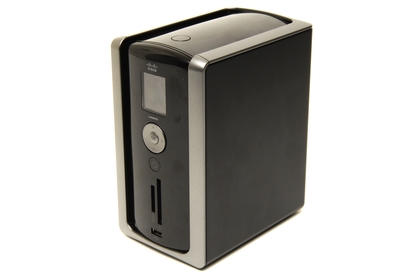 Linksys by Cisco's Media Hub NMH405 is an easy to use NAS device with features that make it simple to access and share media on a home network. We weren't particularly impressed by its speed, but we like the fact that it is easy to expand its storage.

Linksys by Cisco's Media Hub NMH405 network-attached storage device allows you to store music, videos and photos and can share them with devices and computers that support the DLNA (Digital Living Network Alliance) standard. It can be a little slow, but the ability to back up from PCs and copy the contents of media cards directly to its internal storage make it an extremely appealing NAS device.

The Linksys by Cisco Media Hub NMH405 builds on the Media Hub NMH305 by adding an LCD status screen and slots for inserting SD, MemoryStick, xD and CompactFlash memory cards or USB drives.

The LCD screen is particularly useful, as it provides vital status and network information, and using it and the navigation pad below it you can initiate a backup from a networked PC or the media card reader.

The Linksys by Cisco Media Hub NMH405 comes with a 500GB Western Digital Caviar Green 3.5in hard drive installed, and there is a second drive bay for inserting a standard 3.5in SATA 2 hard drive of your choice. The tool-less caddies make it painless to insert a new drive. Unfortunately, the Media Hub NMH405 only supports JBOD (Just a Bunch of Disks) and RAID1 drive configurations.

The Media Hub NMH-405's Web interface is based on Adobe Flash, making it much more user-friendly than the interfaces of more advanced NAS devices such as the QNAP TS-439 Pro Turbo NAS.

The interface provides separate file browsers for photos, music, video and data, and also has a password-protected configuration window. After you have selected a file to view or listen to, media playback begins quickly; it is better in this regard than the Linksys by Cisco Media Hub NMH-305. Power users are likely to be disappointed at the lack of configuration options, such as automatic media backup or folder monitoring. Most services, like the iTunes server, backup and media aggregation, only have enable or disable settings.

In Intel's NAS Performance Toolkit, the Media Hub NMH-405 proved to be slightly slow. In the tooolkit's high-definition tests — which simulate 720p playback and recording through Windows Media Player — the NAS device averaged between 6 and 11MB per second. Most write-based file tasks performed at a speed of 9-12MBps.

We also tested the NAS device by transferring 20GB of large files (between 3-4GB for each file) from the Media Hub NMH405 to a PC equipped with a WD 300GB Velociraptor hard drive and connected through the Gigabit Ethernet ports on the Edimax nMax Wireless Router. The data was written to the NAS device at 12.9MBps, while read speeds averaged 18.4MBps.

Understandably, it was slower when we transferred 3GB worth of 1MB files; writing to the NAS device's 500GB WD Caviar Green drive averaged 8.7MBps while read speeds averaged 11.7MBps. These speeds are fairly typical for a small one- or two-bay NAS device, though some, like the Western Digital MyBook World Edition, are significantly faster.

Linksys by Cisco has integrated DLNA technology — a simple media-streaming standard which can connect compatible mobile phones, televisions, computers and other devices on a network — into the Media Hub NMH-405 NAS device. Not only does this allow it to easily connect and stream data to compatible devices (such as the Pioneer 60in Kuro plasma television), but it also means that the NAS device can stream media that is available on either its internal drives or on other networked devices.

It won't automatically transfer media files from connected devices onto its internal hard drives (though a separate back-up function is available), so the device that the media is situated on must remain switched on and connected to the network. (Obviously, you can manually copy media files to the NAS for playback if you wish.) If your media is scattered on various DLNA-equipped devices, the Media Hub NMH-405 does a good job of letting you access all those files from a central location.

The Linksys by Cisco Media Hub NMH-405 NAS device provides an easy way to share media strewn across multiple computers, and the ability to back up from removable media is a great addition. It could be faster, but it will still handle high-definition playback without any issues.