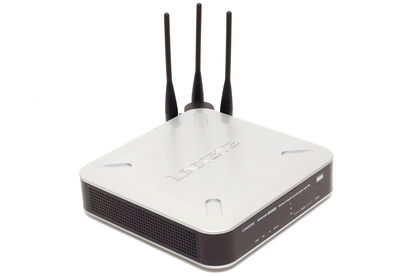 The WRVS4400N's inability to provide us with an 802.11n connection was a chink in its otherwise robust armour. We recommend businesses wait until the 802.11n standard gets ratified and better firmware is released for this model, before considering it.

A gigabit Ethernet connection can boost productivity in businesses where large file transfers are a common task. Likewise, an 802.11n wireless network can boost the transfer rate between wireless clients on an office LAN, and our tests have shown that it can also help increase the speed of file transfers over longer distances.

Linksys' WRVS4400N is a wireless router that offers both types of speedy connections-gigabit Ethernet and 802.11n. While its gigabit networking was impressive, its 802.11n capability was problematic and refused to work at all during our tests.

The 802.11n standard is yet to be ratified, but, in a bid to win customers with claims of faster and longer-reaching wireless networks, many vendors are rolling out 802.11n products based on the draft of the specification ('draft' means the specifications are yet to be set in stone), which boasts theoretical transfer speeds up to 300Mbps (37MBps). Most of these products are aimed primarily at home users who want the extra speed to stream videos to multiple computers simultaneously, or over longer distances, and we've tested a few that have been able to transfer data faster than regular 802.11g routers (Belkiin's N1 MIMO and Netgear's RangeMax NEXT, for example).

We tested the router's 802.11n function with a Linksys WPC300N (version 2.0) notebook adapter, but were unable to connect to the router when using this mode. Changing to 802.11g allowed us to establish a connection with the router, and a 350MB test file was used to gauge the router's throughput. At 1m away, the file was transferred at a rate of 1.3MBps; at 10m away, the file was transferred at 1.2MBps. We used WPA2 (AES) security while conducting these speed tests, and the average transfer rates were slightly lower than what we expected.

Linksys is aiming the WRVS4400N directly at the business market, so the unreliable 802.11n function has the potential to cause many headaches and a loss of productivity due to troubleshooting. In saying that, the WRVS4400N has plenty of other features that should be valuable to many small business users.

Its gigabit Ethernet connection proved to be fast in our tests; a 350MB test file was transferred at a rate of 21MBps, using regular Cat5 UTP networking cables, which is over fifty percent faster than what a 10/100 Ethernet connection can achieve (9.1MBps). This bodes well for users who regularly transfer multi-gigabyte files for video editing, for example, but, of course, the computers on the network must also have gigabit-capable network adapters.

Security is a highlight of the WRVS4400N, and it ships with an active firewall that is enabled by default. Blocks can also be placed on Web applications such as Java and ActiveX, and it has an effective URL and keyword filter, which can be applied to any, or all, computers on the network. Filtering content by specifying URLs or keywords will not bring up a message telling the user that content has been blocked; instead, the blocked content trigger the same 'Server not found' screen that is shown when a Web site is down, leaving users none the wiser.

For connecting to remote local area networks, the WRVS4400N has extensive virtual private networking (VPN) features: it can connect to another router using IPsec; it can act as a passthrough for IPsec, PPTP and L2TP traffic; it can allow up to five remote users to connect with LInksys' QuickVPN client utility.

Wireless security is provided by all the popular encryption types: WEP, WPA and WPA2 (TKIP, AES and RADIUS server authentication), as well as WPA and WPA2 mixed mode. Mixed mode is useful when operating in 802.11b/g/n mode, as it allows computers using either WPA or WPA2 encryption to connect without having to change their settings. The Wireless Isolation feature, if enabled, prohibits wireless computers on the same SSID from seeing each other.

Internet bandwidth management can be enabled via QoS (quality of service), which can be used to dynamically prioritise either certain types of Internet services (such as HTTP or POP3) or ports (such as ones used for peer-to-peer traffic). The bandwidth can't be specified for each service or port; instead, a priority must be set: high, medium, or low. Throughput restrictions using QoS can also be placed on the physical Ethernet ports of the router.

The WRVS4400N's inability to provide us with an 802.11n connection was a chink in its otherwise robust armour. Its security features, wired Ethernet speed, and remote connection facilities, make it an attractive proposition for any business, and its 802.11g speed, while not spectacular, was acceptable. However, we recommend businesses wait until the 802.11n standard gets ratified and better firmware is released for this model, before considering it.