For only $170, the Linksys E2000 offers pretty good value. It can run in either the 2.4GHz or 5GHz wireless networking bands (but not both simultaneously), it has a Gigabit Ethernet switch and all the other regular features one can expect in a wireless router. It was relatively easy to set up thanks to the included Cisco Connect software, and it's a great wireless router for novice users who may not be confident about setting up a wireless network. Best of all, the E2000 was fast and reliable during our test period. We recommend it.

The Linksys E2000 is a reasonably priced Wi-Fi router with excellent features. For its $170 price, you get a 300Mbps 802.11n dual-band wireless access point that can run either in 2.4GHz or 5GHz mode, as well as a four-port Gigabit Ethernet switch. The best part is that it's very reliable and fast.

Just like the older Linksys WAG320N (which, unlike the E2000, had a modem), the E2000 can't run both the 2.4GHz network and the 5Ghz network simultaneously, so you'll have to pick one network frequency and stick with it. We can't fault the router for this given its price (the WAG320N cost $279!). You'll have to consider purchasing the $250 Linksys E3000 if you want simultaneous dual-band operation.

The Linksys E2000 looks the same as the older Linksys WAG and WRT models; it doesn't have external antennas, it can be wall-mounted, it has bright LED status lights and its capabilities can be gleaned by the colour of its wing (grey means it has Gigabit Ethernet capability). It lacks fancy features such as storage ports for turning ordinary drives into NAS devices, but if you want this function you can opt for the E2100L. The E2000's Web interface hasn't changed, but the special setup software that Linksys ships with its wireless routers has been simplified in a bid to make it as easy as possible for novice users to install it.

In our tests, the E2000 proved to be solid as a rock; we used it with the Billion 5200S RD ADSL2+ modem and our iiNet connection never once dropped out unexpectedly during our week-long test period. Furthermore, the router's wireless performance was stellar.

When transferring video files from our server (which was connected to the router over Ethernet) to our dual-band capable notebook, the E2000 never faltered. Using the 2.4GHz band, we achieved transfer rates of 9.47 megabytes per second from 2m away from the router and 8.38MBps from 10m away. These are excellent results that pretty much blow away the competing routers at the same price point, such as the Netgear Wireless N 300 WNR2000 and the D-Link DIR-600. From 2m away, the 5GHz tests produced the exact same transfer rates as the 2.4GHz tests (9.47MBps), but from 10m the transfer rates dropped slightly to 6.74MBps.

The router offered great range in our test environment; it was able to supply a usable Internet connection from over 35m away, but its range will vary depending on the environment where you install the E2000. We think it will perform well in a mid-sized house for streaming video in addition to sharing a fast Internet connection across many computers.

Linksys has done a lot over the years to try and take the pain out of setting up wireless routers. With the E2000, the supplied CD-ROM autoruns the Cisco Connect software, which goes through all the steps you need to undertake in order to first connect your new wireless router, and then asks you type in your ISP username and password. That's all there is to it. In our tests though, we also had to manually restart the router in order for it to work after the program updated its settings. The only thing that caught our attention about this setup procedure was how long it took. We were able to set up the router a lot quicker by logging in to the Web interface and entering all our details manually. But the CD-ROM is aimed at people who don't want to have to deal with advanced settings, and in this respect it's definitely useful. 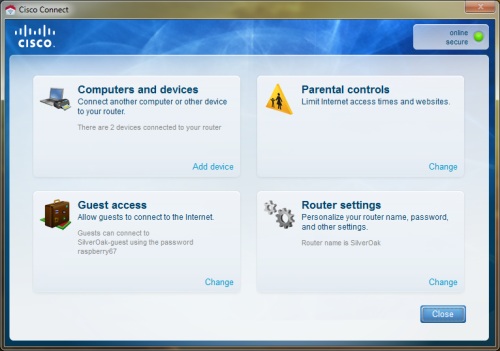