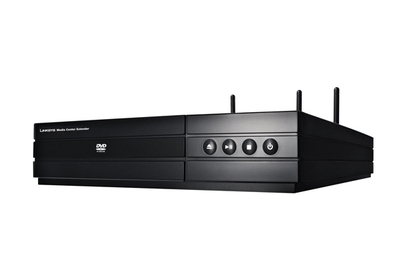 While we like the LinkSYS Media Center Extender with DVD Player DMA2200, we found using Media Center too unreliable to replace our Freeview boxes, let alone a service such as Sky+. And although media streaming and DVD upscaling make this a fully-featured device, its Media Center foundation prevents it from reaching its potential.

Media Center has proved that TV can work on the desktop, but can it take over your television? Bill Gates has rarely made a secret of wanting to bring Windows out of the spare room and integrate it throughout the house: he'd like Windows reading recipes to you in the kitchen; controlling the lights in your bedroom and taking over the television in the front room.

And while the Vista-powered fridge and voice-operated bedroom remain only in the residence of Bill Gates, Microsoft has made serious strides to taking over your front room.

Windows Media Center is a decent attempt to bring together all the media in your life (movies, pictures and music) with television broadcasts and — looking to the future — IPTV.

Windows Media Center is also one of Microsoft's most accomplished pieces of software: stylish to look at, simple to use and genuinely powerful, it offers all the features required to take your television to the next level.

As well as enabling you to watch and record television, Media Center acts as a central hub for all your digital media (movies, music, photos etc.) The only down side is that Media Center is obviously a Windows program and huddling round the PC to watch the latest episode of 'Heroes' doesn't go down as well as slouching on sofa. This is where a Media Center Extender comes in.

Devices such as the LinkSYS Media Center Extender with DVD Player DMA2200 enable you to connect your television to your computer via a home network and control Media Center from the comfort of your couch.

It's great in theory, although we found it to be less than ideal in practice. The problem lies with Media Center itself though, rather than with LinkSYS's Media Center Extender DMA220

Media Center PCs were originally designed to be complete PC solutions that connected to your television, until Microsoft realised that nobody wanted to spend $1,500 on a glorified set-top box recorder and Media Center itself would have to live with the computer, which is usually found elsewhere in the house.

This, of course, brings up another problem: people want to watch television on the television, not on the computer in the spare room.

So Media Center Extender stepped up to breech the gap. Unfortunately, there's another problem. The PC itself (usually in the spare room) is supposed to connect to the TV antenna, which is usually in the front room. So you'll need to run an aerial to the computer, which will play and record television and stream it over the network to the television itself.

If this sounds a little like a long-winded solution to you, then you'd be right. It also doesn't help that we've found Media Center to become extremely unhappy if its aerial signal isn't 100 percent, with the menu hanging, crashing and resetting the LinkSYS Media Center Extender with DVD Player DMA2200 periodically.

It was when we had to input the eight-digit sync code into Media Center for the third time that we decided the LinkSYS Media Center Extender with DVD Player DMA2200 wasn't the TV solution we were looking for.

Which is a shame, because aside from Media Center's unpredictability as a television recorder and player, the LinkSYS Media Center Extender with DVD Player DMA2200 is a great device.

The presence of a built-in DVD player is welcome, and its high-def upscaling is fantastic, as is using it as a general media streaming device. We managed to get it to play some files (DivX and WMV) although there were codec issues and it doesn't play other formats such as QuickTime Mov or MKV.