Saviour of life or a $526 complete load of bollocks? We can’t decide. 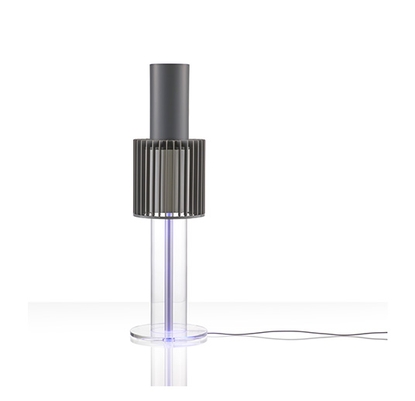 If you've got enough money to buy one of these artsy devices, then chances are you live in an environment that doesn't require it.

We try and review everything at Good Gear Guide. Purifying the air around our office seemed like a good idea and the Lightair sounded interesting. It sells itself as an air-purifier without needing filters. All good.

In some ways it resembles an objet d’art: a functioning, tubular machine which emits a soft light (that can be independently turned off to the purifier) while collecting airborne lurgies so that you don’t have to breathe them in.

The ‘science’ apparently relies on emitting negatively-charged ions (anions) from the top. These cling on to random particles which are then attracted to the charged metal band on the purifier. When the band gets coated in crud you can wash it off and carry on. For shits and giggles you can turn it on and get a static shock by touching it.

We’ve had it running in the centre of our office (which isn’t particularly out of the ordinary but for the world-class view) for some three months now. We’re not sure how disappointed or happy we were that it hadn’t collected much dirt in this time.

The ring was a bit dusty, but not enough to make us think it needed to be there. Nostrils and bogeys are designed to deal with this level of pollution. To be fair, Lightair says that it's designed for much smaller (50m square) rooms, but really, they'd have to be pretty grim to make use of this: coastal conurbations with proximity to ocean breezes (as in Australia) aren't prone to air pollution.

However, there will be dirtier environments than a North Sydney corporate office so it’s not really fair to write it off as no good just yet. If you’re near a coal mine it is probably of more help - although you’d be silly to rely on this to keep you safe in such circumstances.

Nonetheless, if you feel that your air needs purifying and having a machine helps you feel relaxed, then it could be a good buy - that's if $526 doesn't sound like a lot of money. To normal people, why have you even read this far?