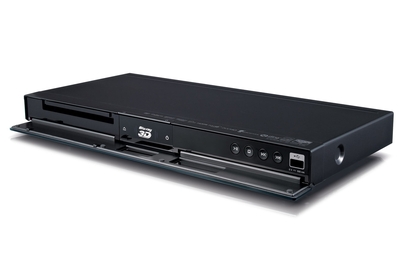 The LG BX580 does an excellent job turning the bits on a DVD or Blu-ray disc into stunning images. Its Internet content and multimedia capabilities are among the best. And for a 3D Blu-ray player, the $300 estimated street price (as of November 22, 2010) is remarkably reasonable.

We didn't test or grade 3D image quality, but the BX580 produced particularly impressive results in our regular 2D tests. It received grades of Superb on most of our tests, and never scored less than Very Good.

It received its worst scores -- straight Very Goods -- on our Phantom of the Opera DVD test (chapter 3). Even there, the sense of depth it produced in one long shot was simply amazing (for a DVD, of course). In other shots, however, it showed only slightly more detail than our reference player, a Sony PlayStation 3.

No such qualifications are necessary when praising its Blu-ray image quality. Everything looked dark in a night scene from The Searchers (chapter 20), yet no details were lost, and John Wayne's suspenders seemed to jump out of the screen. In the black-and-white Good Night and Good Luck test (chapter 1), extras who looked out of focus on the PS3 were near razor-sharp here. And on the Phantom of the Opera Blu-ray test (chapter 3), we saw makeup details on an opera singer that we'd never noticed before.

A great picture demands great sound. If you have an older home theater receiver -- especially one with optical inputs but no HDMI -- the BX580 can give you the best sound that receiver and connector can probably handle. It does so through an option to convert your audio to DTS (as well as the usual Blu-ray player options of PCM conversion and passing it on unchanged as a bit stream). DTS provides the best surround sound that an optical connection -- and most older home-theater receivers -- can manage.

Unfortunately, if you want 3D, you may have to settle for the optical audio output, even if your amplifier takes HDMI. That's because the BX580 has only one HDMI port--a serious shortcoming for a 3D Blu-ray player.

Here's why: You can't send a 3D signal from your 3D Blu-ray player to your 3D HDTV if you have daisy-chained between them a receiver that doesn't support 3D. If you don't want to upgrade your receiver, your only option is to connect the Blu-ray player straight to the HDTV, and directly via another cable to the receiver. If the player has only one HDMI port, as the BX580 does, you'll have to use an optical connection and sacrifice sound quality.