A Secret no longer 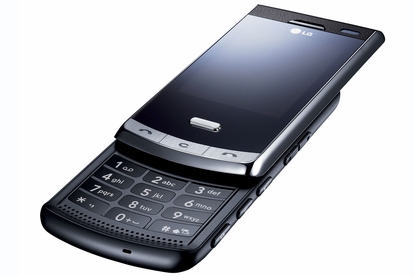 LG’s Secret is a stylish combination of features and glamour. This compact slider is a reasonable performer in most areas, but it isn’t perfect.

Boasting a 5-megapixel camera with flash, HSDPA-connectivity and a neon touch-sensitive control system, LG's Secret is a slider with a balanced blend of style and features.

Along with a tempered glass front, chrome edging and its stylish neon touch navigation system, the KF750 also has a carbon fibre rear battery cover. This gives the Secret a strong and sturdy feel. This is also true of the spring-operated slider, which is smooth and solid in its operation. Two downsides to the tempered glass front are its weight and the fact that it's almost impossible to keep free of fingerprints. When slid open, the unit feels top-heavy, although this does contribute to the handset feeling sturdy.

The neon touch navigational system works relatively well; we liked the haptic feedback option, which makes the phone vibrate each time a key is pressed. The neon effects add to the stylish design and are relatively responsive; however, the two selection buttons are a little too close to the directional keys for our liking. It is also quite easy to accidentally bump the touch keys, especially in landscape mode when using the camera.

The camera's 5-megapixel sensor and flash combine to snap decent photos in low light levels, making the Secret handy for some happy snaps on a night out. It still won't replace a standalone digital camera, but the Secret is certainly one of the better camera phones on the market. We were particularly impressed with the relatively low levels of image noise and the lack of a halo effect on the edges of photos, both of which are common issues with camera phones. The handset also doubles as a video recorder, and there is an option to upload videos straight to YouTube.

Being an HSDPA-capable handset, the KF750 also features a front-mounted VGA camera for video calling. Mobile Internet can be accessed with the included browser, although the user experience isn't the best, as pages take a while to scroll through when they aren't optimised for such a small display.

The Secret is a fair but not outstanding multimedia handset. Though there is no 3.5mm headphone jack on the device; LG has included an adapter in the sales package that allows any standard set of headphones to be used. The included headphones are of reasonable quality, and are perhaps slightly better than those typically packaged with handsets. In addition to a music player, the Secret also boasts a video camera, FM radio, voice recorder and media editor. A microSD card slot is available for extra storage in addition to 100MB of internal memory.

The Secret introduces a feature called Touch Media. This aims to bring together all the phone's multimedia features, including music, photos, games, documents and radio. Selecting the Touch Media menu brings up a menu where all of these can be accessed, and the display becomes a touch screen. This feature has decent implementation, but having to navigate into the main menu to access it means it probably won't be used very often — these features can be accessed without the need to delve into the Touch Media menu. We also find it somewhat strange that the display can act as a touch screen for this menu, but not for other handset features.