LG Prada Phone 3.0 review: All style, but not enough substance 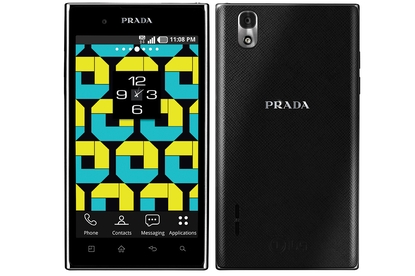 LG's Prada Phone certainly looks the part thanks to a classy design that blends well with the company's unique, monochrome user interface. Unfortunately, this interface is also the cause of much inconsistency. When combined with only average performance, poor battery life and no real class leading features, the Prada Phone is quickly lost among better competitors.

The LG Prada Phone 3.0 is powered by the now outdated 2.3 Gingerbread version of Google's Android platform. LG says it won't be upgraded to the latest 4.0 Ice Cream Sandwich until "later in 2012".

The delay for the upgrade is a result of LG's custom user interface which utilises a unique monochrome look and feel. Almost every part of the Prada Phone 3.0's UI has been skinned with a white on black flavour, from widgets to menus and even key apps like phone and messaging. The result is aesthetically pleasing, if a little bland, but it's inconsistent. LG has skinned most of the default apps but some, like the gallery, have escaped the creative brush resulting in a dash of colour in an otherwise black and white world.

The inconsistency gets worse when you start downloading third-party apps. These use the default, coloured app icons and result in an odd-looking app launcher. To be fair, LG does allow you to change the default icon to a monochrome one by holding down on an icon and tapping the edit button that appears. However, the icons can only be changed on the homescreen and not in the app launcher. 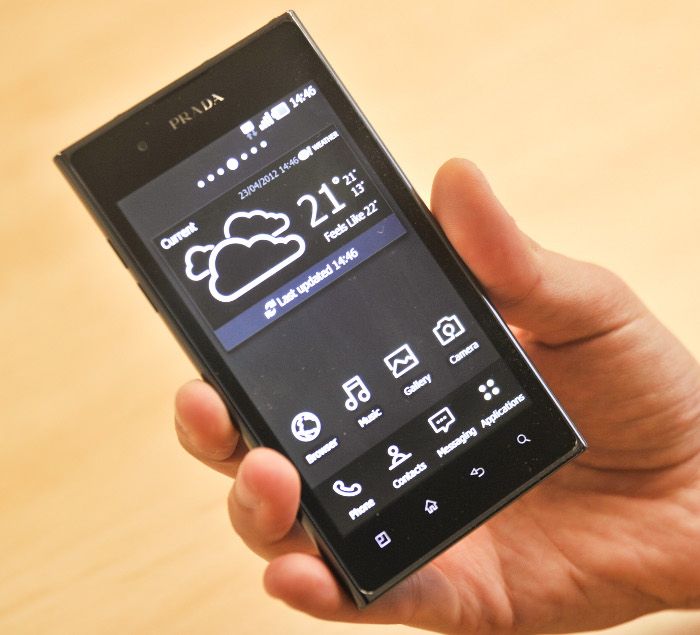 The collection of icons is pretty impressive and even includes A-Z letters which could be applied to any number of third-party apps. Despite the flexibility, we think the process requires too much manual effort for what is such a simple UI feature.

Interface aside, LG does bundle some worthy included apps with the Prada Phone 3.0. The desk home app turns the phone into an attractive, large flip clock, LG's Smartshare app allows you to share media content to any DLNA-enabled device (such as a TV or tablet), while the Polaris Office suite allows users to create and edit office documents. There's also a basic image editor, a memo app for quick notes along with a purpose built app for NFC (Near Field Communications). The latter allows you to share contacts, a URL, a memo, a text message or a calendar schedule simply by tapping the Prada Phone 3.0 against another device with an NFC chip. NFC technology is still in its infancy, so this is more a future proof feature rather than one you'll get a wealth of value out of immediately. 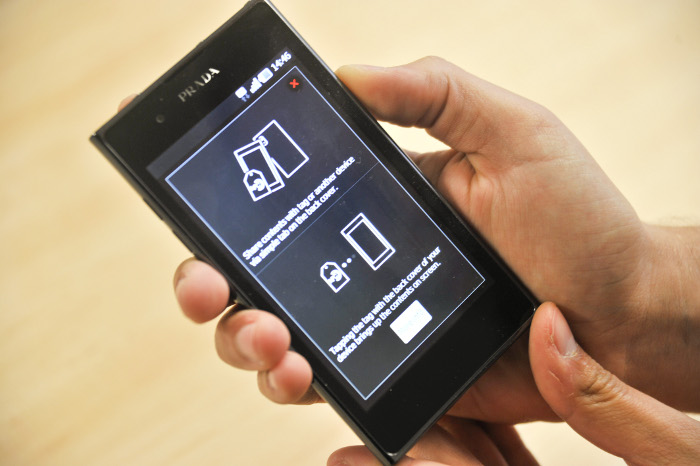 However, the phone doesn't feel as snappy as some of its latest competitors. There's a slight delay when opening basic menus like the app draw, for example, while we found page loading times on the stock browser much slower than many other smartphones we've recently tested. A 1GHz dual-core processor and 1GB of RAM should be enough to adequately load Web pages, so we suspect this is largely a software issue that may be resolved once LG updates to the more efficient Ice Cream Sandwich platform.

The LG Prada Phone 3.0 has an adequate 8-megapixel camera that takes average photos. Although colour reproduction is quite good for a camera phone, we found that most of our photos turned out blurry suggesting the autofocus feature needs some fine tuning. The camera app is skinned to match the monochrome UI and features like flash, aperture and digital zoom are quickly accessible. Photos can be stored on the 8GB of internal memory, or a microSD card which is accessible by removing the rear battery cover. 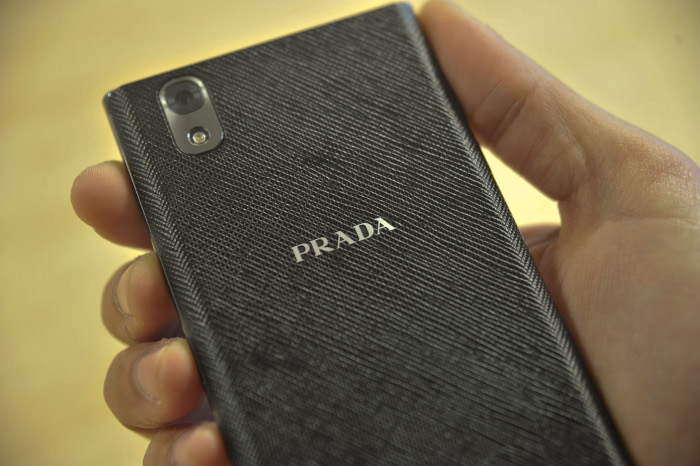 LG has strangely positioned the dedicated camera button at the top of the Prada Phone 3.0. It's almost impossible to take a single handed photo using the shutter key and the button itself feels sticky and requires a real firm push to snap a photo. We preferred using the on-screen shutter key.

Disappointingly, the Prada Phone 3.0's 1540mAh battery isn't powerful enough to last a full day with regular use. LG's official figures quote a rather low four hours and 20 minutes of talk-time — we could only manage almost 10 hours use on a good day.

The Prada Phone 3.0 is available in Australia exclusively on the Vodafone network. Unfortunately, it only operates on the 900MHz and 2100MHz 3G network bands, so it isn't compatible with Telstra's 850MHz 3G network, nor the newer Vodafone 850MHz network.