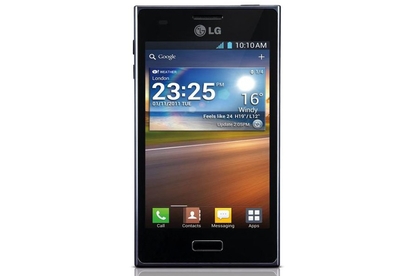 The LG Optimus L5 may have a stylish look, but a very low screen resolution and below average specifications certainly don't appear to do it any favours. Ultimately, a competitive price tag will determine whether or not this is a viable, low to mid-range Android smartphone.

LG's Optimus L5 is the mid-range model in the company's new L-Style range of Android phones, which focus mainly on a stylish design. Unfortunately, the Optimus L5's display has an incredibly low resolution despite its large 4in screen size, which makes it very hard to recommend.

LG officially unveiled the Optimus L5 at the 2012 Mobile World Congress (MWC) trade show in Barcelona back in February. It's one of three new LG smartphones (the others are the high-end L7 and the low-end L3) the company is categorising under the term "L-Style". It's basically a fancy marketing name for some strict design rules that these new LG phones will adhere to.

LG's marketing team says that the L-Style design philosophy is based around five aesthetic elements — a modern square-style that aims to provide comfortable grip, a "floating mass" screen for a slimmer look, a more intuitive arrangement of menu keys, metallic accents and a slim shape. In short, LG's L-Style smartphones will attempt to appear attractive by using a square, slim case.

The Optimus L5 has similar specifications to the smaller Optimus L3. Once again the key feature is its 4in "floating mass display". This isn't a new display technology but merely means the display is positioned closer to the surface of the screen, which aims to give the impression that the screen is floating. We've already seen this type of display on the LG Optimus Black, and to be fair to LG, it does look pretty impressive.

Unfortunately, despite such a large screen the Optimus L5 has a very low resolution of 320x480. Although LG will point to the fact that this isn't a flagship or premium phone, it still seems odd to see a 4in screen with this resolution.

The Optimus L5 doesn't fare too well in other specification departments, either. A single-core 800MHz processor and a 5-megapixel camera are both standard features that certainly don't push any boundaries.

Thankfully, the LG Optimus L5 will ship with the latest 4.0 "Ice Cream Sandwich" version of Google's Android operating system. This will be skinned with LG's poorly named "3.0 UI" overlay which is yet to be detailed. We can only hope LG keeps things simple and doesn't add to many features to an OS that is relatively pleasant to use on its own.

LG will sell the Optimus L5 for $199 outright from August. The phone is available through Boost mobile and a range of Australian retail outlets.