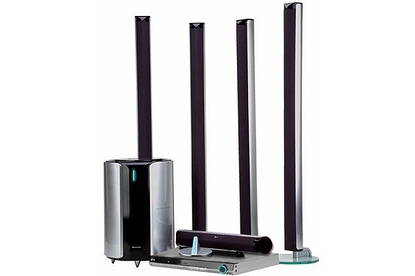 One of the best home theatre systems we've looked at, it would satisfy everyone except true AV enthusiasts who require a hoard of options.

The average wired home theatre system needs upwards of nine or 10 cables to get up and running. Thankfully, several companies have released wireless alternatives over the last year, and the LG LH-W750 700W Wireless Home Theatre is emerging as one of the better options in this category.

Unlike some other "wireless" systems, the surround speakers on this system are actually completely free of speaker cables. They do still need a power connection, but until technology develops to the point where we can transmit power without cables, this is a burden we will all have to bear.

LG has been very smart with this system, taking a "no screws" approach to setup, which, when combined with the lack of cabling, makes it a breeze to deal with. We had the whole system up and running in about 15 minutes, which is record time for us.

The speakers, which come preassembled on a glass base, are all freestanding and quite large. In a space-constrained environment this could pose a problem, but we've found generally that larger speakers do, in fact, produce a richer sound and so we're glad LG didn't skimp on them. The whole system also looks great. The glass bases, combined with black speaker cloth and a slick design gives the kit a very modern feel, and it would look great in any lounge room that could find space for it. The subwoofer in particular is huge and makes the whole system look incredibly powerful.

The wireless system is controlled by a transmitter that plugs into the receiver and can be placed anywhere around your entertainment suite. Compared to some other transmitters, this one is tiny, taking up almost no space.

Sound was crystal clear, and the wireless system didn't cause any degradation. The Dolby test videos sounded fantastic, with the back speakers providing an unrivalled surround experience, and the imposing subwoofer absolutely hurling bass around the room, drawing several comments from passing colleagues in the process. The drums in Crouching Tiger, Hidden Dragon were particularly powerful, occasionally to the point of being a little too strong, but even so, the voices and high-pitched ring of the battles left us captivated.

That is not to say the system is not without a downside. Its biggest drawback is a very basic set of input and output ports. The LH-W750TA sports a single component out, and two regular RCA input connections. It also has a single S-Video output port, and an optical audio connection. We really would have liked to see another component connection, a composite connection and perhaps some support for DVI. As it stands, there is enough support to have basic connectivity, but for more advanced users who want the best quality possible for everything, the options simply aren't there.

We were also disappointed by the lack of sound features available on the receiver. There are basic DTS, Dolby Pro Logic and Dolby Surround fields, and a few preset equaliser settings such as church, hall and music, but not nearly as many as we've come to expect from top-level receivers. There is an XTS (excellent true sound) bass boosting function, but we found it poorly implemented and it didn't make a great deal of difference to the overall sound.

The system offers great support for third-party formats, including the ability to play DivX files, which is a great feature and something that is becoming more prevalent in new players. For the uninitiated, DivX is a form of video compression widely used by the Internet community, and it allows amateur film makes or editors to compile a lot more information onto a single DVD (you can get roughly five feature length movies in DivX format on a single DVD). The LH-W750 also supports MP3 and WMA audio formats.