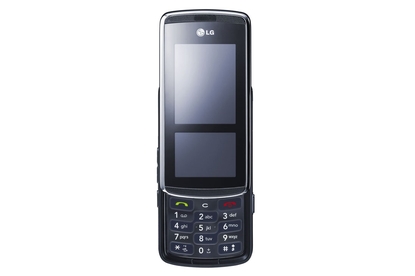 The KF600’s unique touchpad is reasonably successful, but it’s not without its faults. Perhaps the biggest issue with the phone is the lack of 3G connectivity. However, this is still a reasonable handset.

Sporting a morphing touchpad and dual displays, LG's KF600 is an interesting concept. The design and implementation of this technology is far from perfect, but it's usable once you manage to grasp it.

The KF600 basically has two displays — the first a regular TFT display and a second display below it that doubles as the touchpad. The key point from a user perspective is that the touchpad changes depending on what menu you are in. When you slide the handset up to reveal the keypad, there are six boxes, including main menu, messages, phonebook and profiles.

Each time you access a new part of the KF600's interface, the touchpad will display new buttons that correspond with the menu selected. As an example, navigating to the main menu brings up a five-way navigational pad, while selecting to type a new message displays insert, send to and submenu buttons.

The system sounds excellent, but sadly it has plenty of faults. The biggest issue is speed — scrolling through long lists isn't snappy and holding down a button slowly scrolls through the list instead of breezing through it like most other handsets. This means you'll find yourself tapping more often than you should be. The buttons are also somewhat unresponsive at times, making general navigation and browsing through menus a hit and miss affair. It's a shame LG couldn't extend the touchpad's capabilities to the main display, as we found ourselves repeatedly attempting to tap the screen.

Touchpad aside, the KF600 is a stylish and sleek mobile phone. It feels reasonably well built, though not as solid as many of its competitors, and the gloss finish adds a touch of class. Be wary of fingerprints: the KF600 is difficult to keep clean. To help with this, LG includes a screen protector in the sales package.

The keypad is slightly disappointing. In addition to being completely flat, the keys aren't well separated and their glossy finish makes it easy for your thumb to slip off target and bump the wrong key. We still managed to achieve reasonable messaging speeds after a few of days use.

Perhaps most surprising is the fact that the KF600 lacks 3G capabilities. 3G is becoming a standard, especially in mid- to high-range handsets, so the basic GSM/GPRS capability of this handset is a downside. Thankfully, call quality is reasonable, although we did struggle to hear in areas with plenty of background noise.

Features wise, the KF600 is solid, but not outstanding. The three-megapixel camera with flash and autofocus is fair, but images are plagued by many issues synonymous with camera phones, including poor colour reproduction and excessive image noise. The camera doubles as a video recorder, but, naturally, quality is an issue. The KF600's photo viewer is intuitive. Once you've selected a photo, you can press zoom and then move your finger across the image in the bottom display to view different areas of the photo.

An impressive feature is the selection of Keith Haring animated themes. LG has developed these specifically to suit the KF600's dual display. As an example, the animated aquarium background features fish swimming on the main display and shows a silhouette of two people inside the aquarium on the smaller display when the slider is closed.

The KF600 is also well equipped with multimedia features including an MP3 player, FM radio and voice recorder. The music player is decent, offering the ability to create playlists, adjust equaliser settings and utilise basic settings such as shuffle and repeat. The lack of a 3.5mm headphone jack is a downside, but this is somewhat negated by the inclusion of a 3.5mm headphone adapter. You can also use the A2DP Bluetooth profile to stream your music wirelessly.

Other features include a basic Web browser, PIM features such as an alarm clock, calendar, calculator, memo and stopwatch, and SMS, MMS and e-mail messaging with T9 predictive text input. A microSD card slot is provided for extra storage, but its location beneath the battery is a disadvantage. The KF600 includes Bluetooth and USB connectivity, with LG providing a proprietary USB cable in the sales package.