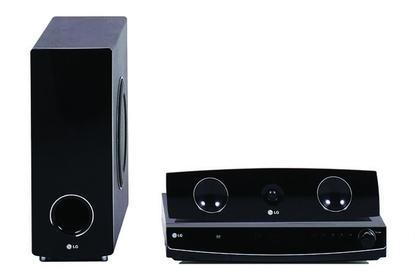 The HT762TZ is a fantastic-looking home theatre system in a box, which offers surprisingly good sound quality, and the ability to upscale standard-definition DVDs to suit new TVs.

LG's HT762TZ home theatre in a box is a mid-range model in the company's line-up, with a decent amount of power and features for its price. The system's main drawcard is its contemporary styling, with the front and surround speakers mimicking champagne flutes. As a package it's visually striking, and in addition to this, sound quality is also fairly impressive.

As with the majority of home theatre in a box solutions the HT762TZ is a normal 5.1 channel DVD speaker system, comprising of four main surround speakers, a centre channel speaker and a subwoofer. These are all connected to the receiver, which also handles DVD playing and upscaling. The receiver houses a large number of inputs and outputs, offering the now-standard HDMI connection as well as component and composite ports. A recessed panel on the unit's front hides both a USB input and a 3.5mm jack for external audio.

The system supports MP3, WMA, JPEG and DivX files, and these can be played back from a disc or via the USB connection. The on-screen menu for file navigation was simplistic and allowed for searching several folders deep, though control with the remote was slightly sluggish and difficult. If you're a fan of backing up and burning video to disc, this system supports all DVD and CD formats except for DVD-RAM.

Setup of the system was surprisingly easy — the speakers simply screw into the base of the stands, and the supplied cables are more than an adequate length. The receiver also has functionality for altering the volume of each individual channel, allowing for a lot of flexibility when setting up. We found the setup menu slightly complicated to navigate and the remote has a large number of buttons which may be confusing, but once the initial process was complete the menu wasn't needed at all.

A large range of audio tweaking options are available, including LG's Virtual Sound Matrix mode, or VSM. This feature emulates a further five channels in addition to the regular six, creating an effective 10.1 channel setup. We found that while this gave the sound a more immersive feel at times it also sounded a little bizarre; probably as a result of having to essentially create more channels from nothing. As well as this, the XTS Pro sound metering system is included in the receiver, which is also intended to balance high and low frequencies. Another aspect we found is that the surround virtualisation was flawless when used with stereo music.

The speakers' sound quality was good, especially considering the slim format. Stereo music was crisp and clear through the front speakers, with the system defaulting to 2.1 if no virtualisation effects were enabled. Throughout all our listening the speakers didn't falter, with strong highs and a pleasant mid-range, as well as a solid kick from the subwoofer. All four main speakers are identical, and have a very crisp, energetic sound.

Video playback was also of good quality. When set to 480p it looked predictably jaggy on a Full HD screen, but once set to 1080p it was obvious that the in-built upscaling does a great job. There were no obvious artefacts or aberrations on the screen, and overall picture quality was excellent.

Despite the HT762TZ's focus on styling and looks, the sound and video quality are still exceptional for the price, and a hefty array of setup features mean this system can be tailored to any living space.