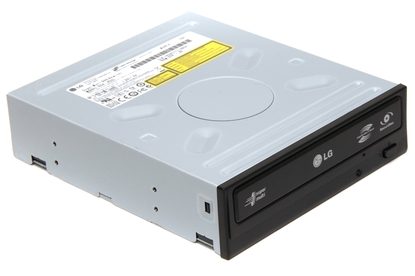 The GSA-H55L offers a slight speed boost over its predecessor for burning single and double-layer DVDs, and the SecurDisc technology makes it an attractive option for businesses that often need to ship discs between premises.

LG's GSA-H55L burner offers more than just an increase in speed over its predecessor, the GSA-H42L. It also ships with the latest version of Nero Essentials, which features SecurDisc - a security technology co-developed by LG and Nero to keep your data safe.

Physically, the GSA-H55L is a 5.25in drive with a short depth (17cm) and an IDE interface (instead of SATA). It comes with black and beige bezels, so it should suit most type of PC enclosures. With a speed rating of 20x for single-layer DVDs and 48x for CDs, the drive can get quite loud when operating at its maximum speeds and we did feel some vibration through our Lian Li PC-101 test enclosure.

At a speed of 20x, the H55L can burn 4GB to a single-layer DVD+R disc in 5min 7sec, and to a DVD-R disc in just 4min 43sec. We used Verbatim media rated at 16x for our tests, but the burner was able to burn to them at the faster speed. We also used Laser media rated at 16x, but this didn't always let us burn at 20x. In fact, on some occasions it only let us burn at up to 12x (which took just over 6min). All the single-layer discs we created were readable in the H55L and also in older-generation drives such our Pioneer 107D. The drive can read DVD-/+R discs at a rate of 16x, which translated to a time of around 8min 42sec when reading back our 4GB of burnt data.

For security, Nero's SecurDisc feature allows burnt discs to be encrypted either with a password or a digital signature. Encrypted discs are only accessible with a signature key or a password. We secured a DVD-R disc with a digital signature, which added only a few seconds to the overall burn time. Using the key to unlock the data took about 5min. This feature can be handy in situations where discs need to be sent via mail; only the person with the key or password will be able to access the data on the encrypted discs and these should ideally be sent to the recipient by the person who created them. The specification sheet claims that SecurDisc can also improve the readability of damaged discs. We tested this claim by tossing around an encrypted disc like a frisbee and stepping on it a few times. It was read back in 14min, which is 6min more than it took when it was in perfect condition.