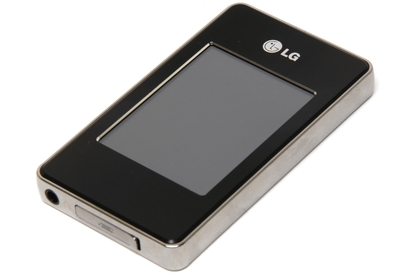 The FM37 is a brilliant portable media player which brings touch screen functionality properly into the media player space. While the screen itself is quite sensitive and takes some getting used to, it is quite intuitive and the rest of the features are very well implemented.

If we had a dollar for every time we've looked at Apple's countless iPod iterations and asked ourselves "Why haven't they released a touch-screen version?" well, then we'd probably not be technology journalists anymore. Suffice to say a touch screen digital media player is a great idea and thankfully LG has stepped up to the plate to fill this gap in the market with their new 4GB FM37 media player. Offering an almost completely button-free interface, this device packs all the features you'd expect from a digital music player and combines them with good quality audio to make a very worthwhile portable media device.

We were a little skeptical about the touch screen implementation when we first got our hands on this unit. Touch screens can often be overly sensitive, or not sensitive enough, making the interface very fiddly. Fortunately the FM37 is simple to use. As you'd expect, with the small 2.4in screen, you can't just go blindly stabbing with your thumb, but by using the tips of your fingers or fingernails you can quickly and precisely navigate the menus. It is intuitive, easy and overall it's one of the best touch screen implementations we've seen on any device in a while. We did have the occasional error, particularly when the menu was in list mode, but our general experience was a positive one.

The menu is navigated pretty much how you'd expect. The default layout is a circle of icons, which can be spun around by rotating the finger, or tapped to snap individual icons into place. Any list can be scrolled through by sliding a finger down the side of the screen. Meanwhile the playback screen allows two control options. You can either tap a small icon at the top of the screen to bring up play/pause, volume and track skip buttons, or you can simply use the built in controls in the playback screen. Running your finger backwards and forwards along the top half alters volume, while doing so down the bottom skips between tracks. You can then tap the centre of the screen to play and pause your media. This is quite well done and it looks very cool when you change things with a slide of your hand. Our only complaint is a fair amount of pressure is required to do this quickly, which could lead to damage later on.

We tested the audio quality with our usual batch of music and everything sounded good. The FM37 sports a 3.5mm headphone jack, so we were testing with our own high quality pair of IEMs (In Ear Monitors), which are particularly adept at revealing any flaws in sound. Bass is slightly emphasized but everything else is fairly standard and overall its sound is comparable with other units on the market.

The FM37 offers a variety of features commonly seen on digital media players these days. Music formats supported are MP3, VBR, WMV and OGG and it also plays MPEG4 and WMV9 video files as well as JPEG and BMP pictures. Aside from picture, music and video playback, it also has text display which reads from standard TXT documents and two games that take advantage of the touch screen functionality. The games aren't all that exciting, and quickly become tiresome. An FM radio is also included and, although it gets decent reception outside, indoors we couldn't find a single station, so its usefulness is quite limited.

During our video and picture testing, the 2.4in screen held up quite well. It produced a clear and sharp image with smooth edges and little motion blur. However, colour representation is not as impressive; reds are oversaturated and flesh tones come across quite dull. Meanwhile contrast is good, with nice shade differentiation. Overall the display is fairly good quality

One of the best things about the unit is that it is completely plug and play, meaning you can just connect it via a standard mini-USB cable and drag files across. This is the simplest method of file transfer and is so much better than any sort of proprietary software requirements. We dragged and dropped all of our media into the appropriate directories and it showed up on the player, completely sorted by artist, genre, title etc. The only caveat to this is that the songs in a subcategory (for example if you go into "Metallica" when sorting by artist) will be listed in alphabetical order, rather than by song number. Alternatively, LG does provide software to help sort and synchronise your music, the LG Media Centre, but as mentioned this isn't a necessity.