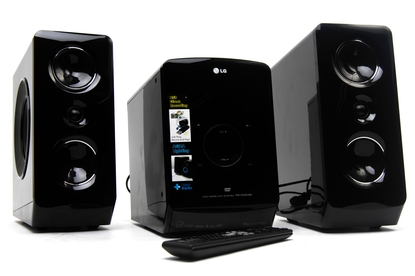 The LG DB164DAB is a compact mini hi-fi system that offers good mid-range punch from its slim, bookshelf-sized stereo speakers. It has iPod and DAB+ digital radio compatibility and can record directly from radio or CD to USB. Just don't lose the remote control unless you think you'll enjoy constantly cleaning fingerprints off the FB164DAB's glossy components.

LG's FB164DAB is a mini hi-fi system with an internal DAB+ digital radio tuner. It has stereo bookshelf speakers with good mid-range and treble reproduction, although there is no lower bass extension and music begins to distort when higher volumes are reached. The LG FB164DAB has an attractive and modern design, but we worry about its fingerprint-attracting glossy finish.

It is a very simple mini hi-fi system to set up. Speaker cables are pre-attached to the left and right bookshelf speakers, and their bare-wire ends attach to the spring-loaded terminals on the rear of the main system. A bundled set of aerials picks up AM, FM and DAB+ radio signals, and a set of component and composite video outputs allow the FB164DAB to be connected to a television for playing DVD movies. An optical audio input allows other devices such as televisions and Blu-ray disc players to connect to the mini hi-fi for audio output.

The LG FB164DAB replaces the LG FB163 and there are a few small design changes. Gone are the bright chrome rings on the speaker drivers, replaced with a classier shadow chrome. The speakers and the control unit have a slight rearward tilt, allowing the unit's display to be easily seen if it is on a low shelf or coffee table. The fascia of each component is finished in an extremely high-gloss black — while it is quite attractive, it is one of the most fingerprint-prone products we've ever tested. 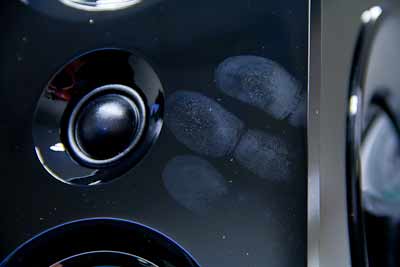 Sound quality from the LG FB164DAB is impressive given how small its bookshelf speakers are. Thanks to two front-mounted woofers and a front-mounted tweeter (in a classic mid-tweeter-mid layout) the speakers are able to produce clean treble notes as well as reasonably powerful mid-range. At higher volume levels sound quality becomes slightly ragged and harsher, with distortion of both treble and mid-range evident at maximum volume. The speakers' side-mounted subwoofer drivers reinforce mid-range audio but don't offer much in the way of lower frequency extension — if you require thumping bass, look for a mini hi-fi system with a separate subwoofer unit.

The DAB+ tuner in the LG FB164DAB performed exactly as we'd hoped, tuning in all the available stations in the Sydney metropolitan region and delivering clean, static-free audio with on-screen station information. FM and AM radio also works well but we'd opt for digital radio where possible. The CD/DVD drive is a slot-loading unit at the receiver's top, and it is quick and quiet when playing audio CDs. You can rip CD tracks to a USB thumb drive, but it is a slow process and only creates low-quality MP3 files. You're better off using a PC if there's one nearby.

The iPod dock isn't as well implemented. No matter what we tried we weren't able to get any artist or track information displayed on the screen of the LG FB164DAB when our test iPhone 3GS was connected. To make matters worse, since the mini hi-fi system takes over control of the iPhone and disables its touch-screen music interface, any manual navigation is impossible. We were also unable to set the iPhone to shuffle mode using the control unit or its remote — music was simply played from the iPod in alphabetical order.

LG's FB164DAB is a well designed mini hi-fi system, and we were pleased with its performance when listening to digital radio and CDs. We're not fans of the super-glossy finish though, and its mediocre iPod integration left us frustrated. If you're not buying this system for its iPod connectivity, it is a good mini hi-fi system.