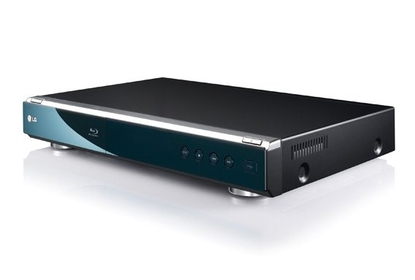 If you can overlook its questionable price tag, the LG BD390 Network Blu-ray Disc Player is one of the better options on the market. No other Blu-ray player currently offers the same breadth of features. Shame about the remote control though.

The LG BD390 Network Blu-ray Disc Player is a BD player with a difference — integrated wireless networking, no less. Having beaten Sony’s impending suite of next-gen offerings to the post, it’s officially the first Blu-ray player to boast built-in Wi-Fi. (Previous wireless models, such as the Samsung BD-P1600, required a proprietary USB dongle.)

So why go Wi-Fi? The advantage offered by wireless connectivity is obvious: it means you don’t have to run unwieldy Ethernet cables from your network router to your living room (or wherever your Blu-ray player happens to be situated). Instead, you simply locate your wireless network in the settings menu and connect to it. You can then download BD Live content, view YouTube clips or access data from your PC’s hard drive — all with a few presses of the remote control. When connecting to a networked drive, the LG BD390 Network Blu-ray Disc Player will automatically arrange your pictures, music and movies into corresponding folders, which is pretty handy (it helps to minimise the amount of time you spend hunting for particular files on your hard drive).

In addition to integrated Wi-Fi, the LG BD390 comes with everything you’d expect from a flagship Blu-ray player, including 7.1-channel HD audio, a USB port for viewing multimedia, 1GB of on-board memory and DivX playback support. All the expected connections are present and accounted for too, including analog audio, a coaxial digital output, component and composite video, HDMI and an Ethernet port for wired setups.

In terms of picture quality and features, the LG BD390 is definitely a winner. But it is also overpriced; $749 is a lot to pay for a handful of bells and whistles, especially from a second-tier vendor like LG. For nearly the same price, you could pick up a high-end player from Sony with all the same features (and a few more besides), or even a Blu-ray recorder. Nevertheless, it remains an excellent Blu-ray player that will serve affluent owners well.

To test the LG BD390’s playback performance, we connected it to a Pioneer KURO PDP-C509A plasma TV with an HDMI cable and watched the Blu-ray edition of The Da Vinci Code. Picture quality was uniformly excellent, with deep, vivid tones and exceptionally sharp imagery — it’s difficult to imagine Vatican City looking any more sumptuous in real life. If you’re one of those people who can’t tell the difference between DVD and Blu-ray, the LG BD390 might just make a convert out of you. We also tested the player’s DVD upscaling capabilities and were pretty impressed with the results. The vistas and images in Lord of the Rings: Return of the King looked a lot more vibrant when played on the LG BD390 than a standard player — indeed, we came perilously close to drowning in Orlando Bloom’s eyes. Ahem.

The LG BD390’s start-up speed was impressively speedy: it presented its welcome/menu screen in less than 10 seconds. This is a far cry from the minute of prep-time required by certain other Blu-ray players (Sharp AQUOS BDHP21X and Panasonic DMP-BD60, we’re looking squarely at you two). Gone are the days when you had go and make popcorn while the Blu-ray player slowly powered up and we couldn’t be happier (or healthier).

But it’s not all a bed of roses. In addition to the afore-mentioned price tag, we were also disappointed by the LG BD390’s remote control. While the faux-leather finish looks suitably elitist, the buttons aren’t particularly responsive and they also lack backlighting. This makes it difficult to make selections in the dark; the Skip and Fast-forward buttons are easy to mix up, for example. Frankly, we were expecting better remote quality from a Blu-ray player in this price range. As it stands, you have to point the remote directly at the player to ensure a response.