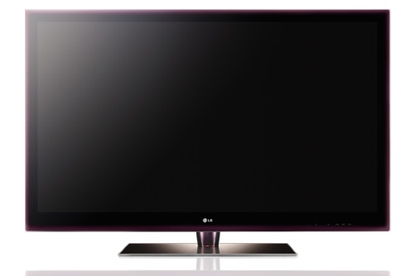 The LG 55LE7500 is a 55in edge-lit LED television that has a very glossy front panel. It looks excellent, but it is very reflective. This can prove annoying if you're watching in a room with a distinct light source. Couch potatoes will be pleased, though - LG's video-on-demand features are extensive and very well implemented.

The LG 55LE7500 is a 55in edge-lit LED TV with Internet video-on-demand features and a thin, glossy design. Its picture quality is impressive, and the television's access to BigPond Movies on Demand is excellent for a lazy night in. However, the glossy screen picks up any and all reflections — which could be a major inconvenience for some people.

The super-glossy front panel of the LG 55LE7500 looks great when the television is turned off, but if you're in a room with any discrete light sources (such as lamps) you may have problems with unwanted reflections. In a well-lit room — our fluorescent-lit test environment is roughly as bright as a sunny day — you'll be able to see your surroundings mirrored back at you. If you're in a dark room, this problem is significantly lessened.

We really like the Internet features of the 55LE7500. Called 'NetCast', the system allows users to access weather, Picasa, YouTube and BigPond Movies on Demand. The last feature is the most useful, allowing couch potatoes to sink further into their favourite recliners and order up a swathe of movie content. If you don't want to spend extra money on a media streamer or Blu-ray disc player, the BigPond Movies on Demand connectivity really is useful.

When it comes to displaying high quality content, such as a Blu-ray movie — if you're able to get rid of any unwanted reflections — the LG 55LE7500 does a great job. We'd definitely lower the backlight as much as possible to reduce unwanted light bloom, where the screen's light source is displayed unevenly across the screen. We found LG's Cinema preset to be the best default mode for watching content with.

Contrast was generally good, with plenty of detail found in darker areas of the screen in our The Dark Knight Blu-ray test. The picture of the LG 55LE7500 also consistently looked vibrant and vivid, without destroying detail in saturated scenes.

The LG 55LE7500 is a mixed bag. It's got great Internet features and great picture quality from its 55in Full HD panel, but the glossy panel severely restricts its usability in bright areas unless you can position it perfectly.