This LG plasma can record TV to an internal hard drive 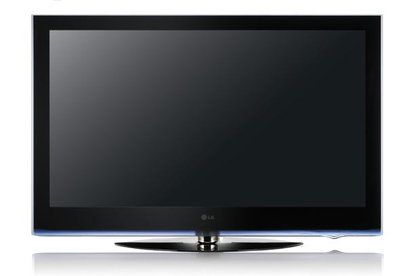 The LG PS80 plasma is a great all-in-one solution for watching broadcast television as well as high-definition content. It only suffers from a few small flaws.

The LG 50PS80ED is a good 50in plasma television for anyone who watches a lot of broadcast television and wants a TV that looks great. It has a few features that set it apart from the crowd, including an internal hard drive.

The 50PS80ED sports LG’s ‘frameless’ design, with a sheet of glass covering both the screen and the bezel. It’s a great concept, but we think it could have been improved if the bezel was finished in the same colour as the screen itself. A soft blue edge light on the bezel glows when the television is on, while another flashes when changing the volume or channel using the remote. We really like the design apart from the grey screen and high reflectivity.

The LG 50PS80ED has all the ports you’d expect from a high-end plasma. Four HDMI ports, as well as dual inputs for S-Video, composite and component are situated on the side and rear, along with VGA and audio connectors. A USB port is used for multimedia playback and the television’s Time Machine Link system, which allows the transfer of recorded video files if the TV's internal drive is full.

The on-screen menu — which you’ll be seeing a lot of if you’re a fan of recording television — is clear and concise. We found the digital television menus easy to navigate, but accessing advanced features takes a little more work. The Picture Wizard for fine-tuning the television’s brightness, contrast, sharpness, saturation and tint is very useful for novices, and going through this short process dramatically improves the television’s vibrancy.

The internal tuner of the LG 50PS80ED is great. A dual HD tuner is integrated so you can watch one show while recording another. Setting recordings is easy through the on-screen menus; you can set up a recording quickly using the record button on the remote, which brings up a prompt, or through the electronic program guide. Our initial channel scan was speedy and accurate. We’d rate the tuner system in this television as only slightly below the brilliant one in Pioneer’s PDP-LX609A plasma.

Picture quality is the best we’ve seen from LG. One standout was the screen’s great brightness range. Even in a room with fluorescent lights we found the screen vibrant and easy to see at all times. The screen was overly sharp in its default settings, but running through the Picture Wizard improved this considerably. Contrast is an impressive 2,000,000:1. A lot of detail was visible in the darkest scenes of The Dark Knight on Blu-ray, which we watched through an LG BD390 Blu-ray disc player. Upscaling was also good: we watched a few DVD-quality videos and found the image to be smooth and colourful, if not as detailed as Pioneer’s implementation.

LG’s Time Machine plasma television stands out in a market of samey televisions. The internal hard drive cuts down on unnecessary clutter &8212; if you’re a fan of watching and re-watching television, the LG 50PS80ED all you need.