This thin, LED-backlit television has good picture quality and a distinctive design 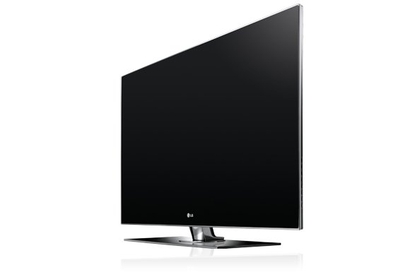 The LG 47LS90QD is an advanced LED television with a wide range of image enhancing features. We think it would be most at home when wall-mounted and professionally calibrated, but even straight out of the box it provides plasma-rivalling picture quality.

The LG 47SL90QD is a 47in LED television with a high 3,000,000:1 contrast ratio, a 100Hz image smoothing mode and a "borderless" flat glass design. It outdoes Samsung's edge-lit LED televisions in picture quality, but the design may not be to everyone's taste.

The 47SL90QD is one of LG's premier LCD/LED televisions — it is outclassed only by the SL95 series, which offers 200Hz image smoothing and wireless HD streaming (as found on the Panasonic TH-P54Z1A plasma). Like the SL95, the 47SL90QD has a sheet of thin LED backlighting, so it's lighter and thinner than older CCFL models. The TV's ability to lower brightness in specific segments of the screen is responsible for the 3,000,000:1 contrast ratio.

The TV uses LG's "borderless" design, with a single sheet of glass running across the entire fascia of the television. No bezel means that the panel looks ultra-modern and slick — we think the LG 47SL90QD would look great hanging on a wall with a low-profile mount. The screen still has black edges, though, which some people might find unappealing. The design has the upside of making the screen easy to clean, and there's nowhere for dust to settle. The 47SL90QD is little more than an inch thick, so it's on par with the Panasonic TH-P54Z1A and Samsung UA46B8000 if you're looking for a high-end, high-class television set.

Like other premium televisions, the LG 47SL90QD has plenty of inputs to connect digital video devices. The side panel has an HDMI port for temporarily connecting devices like high-definition camcorders, and a USB port for playing DivX movies off a flash drive. Around the rear of the unit, three HDMI ports are joined by the usual repertoire of component, composite, S-Video and VGA connectors. Along with the three-pin power plug, all these ports are rear-facing rather than downward-facing, which may make wall mounting complicated.

After turning the LG 47SL90QD on, the icon-based LG on-screen menu comes up quickly. It is easy to navigate through the various menus — scanning for digital television channels and adjusting picture settings is a breeze. If you're using the 47SL90QD as part of a serious home theatre installation you can get the panel calibrated to suit your room by an ISF calibration expert; the menu has two "expert" settings that can be adjusted to suit day and night viewing.

Picture quality is impressive. We haven't seen an LED television for a few months now — the last was the Sharp LC40LB700X — and the LG 47SL90QD reminded us why these televisions are trading blows with high-end plasmas for the picture quality crown. The dynamic backlight adjustment allows the LG panel to display bright white light in one segment of the screen while others are dark or incrementally lit. This technology allowed the LG 47SL90QD to shine in our difficult The Dark Knight test scenes, which feature pin-pricks of harsh white light against a jet black background.

The LG 47SL90QD has vivid (if not completely accurate) colour reproduction, tending towards slight oversaturation in the majority of default image modes. The TruMotion 100Hz system displays video smoothly, and although the system isn't as advanced as the 200Hz offerings from competitors (and LG's own LH50) it handles fast motion acceptably.

A pair of well-tuned speakers rounds out the LG 47SL90QD. This LED television is a competent performer on par with Sharp's LED offering, and we think it will be a strong contender with Panasonic's Viera plasmas.