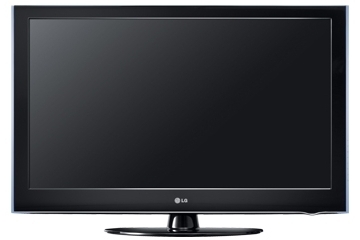 LG's 42in 42LH50YD is the company’s first attempt at a 200Hz LCD television. It's a competent panel that offers good motion control. Picture quality is good for the asking price, with vibrant colours and sharp detail.

The LG 42LH50YD TV has a stylish design, with a translucent accent running around the outer edge of the piano-black bezel. A swivelling base makes small adjustments easy.

The LG 42LH50YD offers three rear HDMI sockets and an additional side-mounted socket for high-definition digital video devices, while two component, three composite and a VGA connector cover analog devices. We’d like companies to start making the transition of abandoning composite connectors, but we can understand their inclusion for legacy purposes.

The interface's text is large enough to easily read from a distance, and it has clear cartoon icons. It’s not as slick as Sony’s polished XMB menu system (as seen on the Sony XEL-1 OLED TV), but it gets the job done without looking ugly or bland.

Picture quality from LG’s latest panel is impressive. Colours were vibrant; they were slightly over-saturated by default but this was easily fixed. We were able to see a great deal of detail in 1080p content, and a small amount of tweaking achieved optimum image quality without over-sharpening.

LG’s TruMotion 200Hz system uses a combination of 100Hz frame insertion along with what the company terms ‘backlight scanning’ — turning the backlight off momentarily to create a black frame. The system works well and otherwise jerky film and fast motion is smoothed significantly. We still think that 200Hz systems look a little too artificial and over-smooth, but having the ability to adjust motion smoothing to this level is a positive point. A ‘low’ motion control setting is also available. It gives results similar to normal 100Hz smoothing.

The 42LH50YD's high-definition performance is good, with fine image detail easily visible in our Band of Brothers 720p and The Dark Knight 1080p content played through a Panasonic DMR-BW850 Blu-ray disc recorder. The LCD television’s 150,000:1 dynamic contrast ratio leads to a decent performance in The Dark Knight's difficult dark scenes, though we did notice some loss of detail in the blackest areas of the picture. The LG 42LH50YD also has a tendency to show blacks quite brightly in its default full-backlight mode — again, a little tweaking remedies it. Standard-definition video is also well handled; the complex lobby scene in a DVD of The Matrix was handled without any distortion or upscaling artefacts visible.

The speakers of the LG 42LH50YD are better than average for a mid-range television, with treble and bass both well represented at low to medium volumes. There’s a variety of virtual surround and equaliser adjustment modes, but we found that for normal listening volumes a little boost to bass levels was all that was needed for dialogue to be clear and movie sound effects to be realistic.