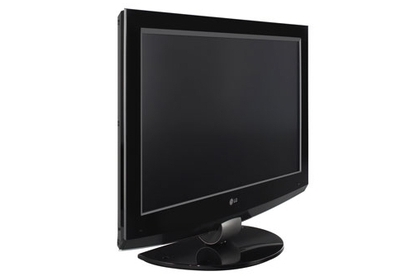 The LG 32LB9D is an exceptional LCD television which performed brilliantly across all resolutions.

The LG 32LB9D is a 32in LCD television with a native resolution of 1366x768. It is an exceptional television which tested with flawless results. We put it through the wringer with tests in high definition, standard definition and hooked up to a PC. In each test, it passed with flying colours.

When testing we like to use a combination of real world and technical testing methodologies. The technical tests are rather unforgiving on a panel and reveal every flaw, however minor. The LG passed these tests with very few errors across all resolutions. There was a very minor level of over-sharpening, but it was barely noticeable and easily correctable.

No matter how long we played the Xbox 360 on this panel, we couldn't detect any problems. We tried different games, downloaded video and movie trailers - all in 720p high definition, but the television performed beautifully. The colours were excellent and, after a minor adjustment, the blacks were deep and rich. The adjustment we made was a small drop in the backlight intensity since blacks were looking a little grey.

Since high-definition gaming may not be everyone's cup of tea, we ran tests using HD DVD and Blu-ray movies as well. At 1080i resolution, movies looked clear with no detail loss or interpolation problems. There were also no colour or over-sharpening and no discolouration. All these results combined make for an impressive television, especially at this price point. For those on a budget, we found the 32LB9D to be a viable alternative for viewing 1080p content.

For many people, a primary concern when buying a HD panel is whether it can display standard definition content as well. With DVD movies being the current standard, it stood to reason that we should perform DVD movie tests as well. The panel performed well in this regard without falling victim to any of the usual standard-definition scaling problems. There was no pixelation on edges or over-sharpening, and the noise in the image was at a bare minimum. The background textures showed no discolouration and there was no stepping on skin tones. If you have a whole bunch of DVDs, the 32LB9D will display them well.

Connected to a PC via the VGA D-Sub connection, the panel once again performed flawlessly. The desktop icons and text looked clear and crisp without any over-sharpening or loss of detail. We expected to find an error or two in the DisplayMate Video Edition tests but were surprised to find none. The only complaint we have about the PC mode is that the television doesn't detect the PC resolution automatically, but requires the user to go into the options and set the resolution manually. It supports four resolutions, which are 1024x768, 1280x768, 1360x768 and 1366x768. We ran our tests at 1360x768 as this was the highest resolution allowed by our video card.

We also found the integrated speakers weren't the best we had heard. On a whole, they were good but at the highest volumes there was a little distortion as well as a loss of treble and bass. However, since the maximum volume was very loud, we suspect many people won't be cranking it to 11 and being disappointed by these results. The final point we need to make is that we found the on-screen calibration options to be rather limited. Since the panel performed so well, this isn't really a problem but nonetheless, six-axis colour control would have been the cherry on top of an exceptional panel.