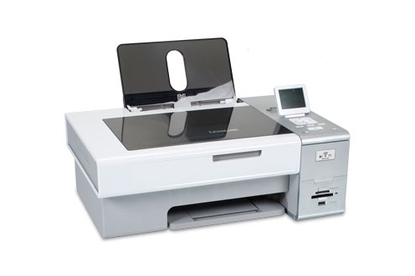 Neither of the new Lexmark wireless multifunction printers is cheap, but the wireless features are well worth looking into. Add to that great ease of use and very competent print quality, and the X4850 is a very decent model for photo enthusiasts.

Designed for the home user, the Lexmark X4850 is a photo printer, copier and scanner all-in-one with a subtle enhancement -- it has wireless capabilities.

In contrast to the mish-mash of models that have traditionally made up the range, Lexmark is now trying to bring a familiar look and feel to all of its printers and multifunction printer, copier, scanners. That means that the Lexmark X4850 seems very similar to the X6570 -- even down to the almost identical price tag.

This resemblance is clearly a very good thing when it comes to ease of use since it means that, just like the X6570, the Lexmark X4850 is one of the simplest of multifunction printers to operate and setup.

Look a little more closely though, and there are some differences. Both all-in-ones come with wireless facilities, but while the X6570 is very much an office model, the Lexmark X4850 is aimed more at photo enthusiasts. So gone are the advanced fax and automatic document feeder facilities. Instead you get a useful 2.4in photo display, allowing you to check and edit photos -- both the X6570 and Lexmark X4850 can scan photos from a USB drive, but only on the Lexmark X4850 can you check the pictures directly from the photo display.

In use, the Lexmark X4850 is actually very similar to the X6570, and we had great difficulty distinguishing prints and scans. This isn't a bad thing, since the X6570's prints were packed with colour but, since the print times are virtually identical, you will have to settle for about 1.4ppm (0.8ppm at the highest quality level) for good quality prints.