The Lenovo ThinkVision 14in monitor provides extra screen space in a slim, portable, and simple-to-set-up package. 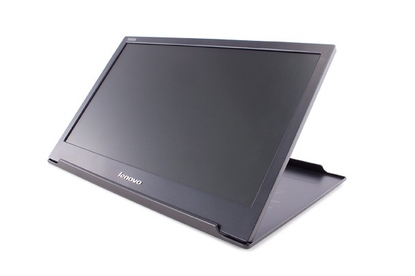 Lenovo's ThinkVision LT1421 is a great dual-monitor solution for laptop users. It's light and easy to carry and draws all its power from your laptop's USB port. Its picture quality isn't great, but that's not the main selling point of the unit -- it's meant to provide great convenience for those of you who need to work with extra screen real estate while on the road.

The 14in, $170 (as of April, 2012) Lenovo ThinkVision LT1421 monitor provides a simple, one-cable option for adding a second display to your setup. A second monitor is useful for many reasons, and whether you just want more screen real estate on your already-crowded desk, or you need a second display to take on the go with your laptop, the ThinkVision LT1421 fits the bill.

This portable monitor is slim and lightweight, measuring about 10mm thick and weighing about 800 grams on its own, or about 2mm thick and 1kg with its protective cover attached. The 14in screen gives you 1366x768 pixels to work with, which is an acceptable resolution for a display of this size.

On the back of the ThinkVision LT1421 is a small raised box that houses the kickstand, the Micro-USB port for connecting the monitor to your PC, and the brightness controls. The only cable you'll need to take with you is the included USB cable, as the monitor draws all of the power it needs from the USB connection. On the end that plugs into your computer, the cable splits into two USB connectors in case one does not provide enough power.

The included cover protects the display in transport and can act as a base for you to set the monitor on atop a desk or table. The kickstand can slot into grooves in the cover to help hold the monitor securely, but I found the kickstand to be strong and grippy enough to maintain the viewing angle even without the cover underneath it. The one drawback: The cover can be awkward to put on, and difficult to remove.

DisplayLink software and drivers power this USB-connected monitor. It's the same arrangement as on the Mobile Monitor Technology Field Monitor Pro Classic I tested previously, which means it suffers from the same inability to render smooth gradients and the same odd color profile that you can't edit. You'll need to install the DisplayLink software on any system you plan to use with the monitor. In my tests, Windows 7 could not install the drivers automatically, so you'll have to install from the included CD, or download drivers from DisplayLink's website. Drivers are also available for OS X.

In use, I found that the ThinkVision LT1421 has fairly narrow viewing angles. It'll work if you're giving a presentation to a few people, as the side-to-side viewing angle is decent, but colors shift significantly if you move too high or too low. Colors look a little washed out, and text is not supercrisp due to the lower resolution being stretched out over 14in. In my tests, the matte screen was great under office lighting, with no glare and good brightness (it has 16 brightness levels), even when I had plugged only one of the two ends of the USB cable into my laptop (a five-year-old Lenovo x61t). In fact, all of the test laptops I tried plugging the monitor into were able to supply sufficient power through just one USB port.

Video playback over the USB connection is lag-free and mostly smooth; a test YouTube video dropped a few frames in full-screen mode, but played back smoothly in the browser window.

The Lenovo ThinkVision LT1421 portable USB-powered monitor makes for a great addition to your travel bag with its slim profile, included cover, and straightforward, one-cable connection. The monitor performs best as a secondary display for email, text, and reference material, though I wouldn't rule out sneaking in the occasional video while you work on your main screen.