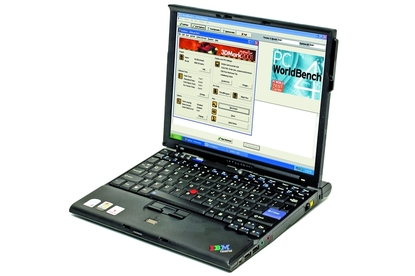 If your business or studies require full functionality from your notebook while away from power and network connections then you can't go wrong with the X60. While it's expensive, it's still competitively priced in its class.

Taking the concept of an ultraportable notebook to new heights, Lenovo's X60 is lightweight (1.6kg without PSU), performs well and combines exceptional battery-life with a Vodafone 3G mobile Internet connection for the best mobility we've seen in a notebook to date. Dispensing with aesthetics, Lenovo has shipped this unit with a single 8-cell battery, which is less streamlined in appearance, but which powered the unit for eight hours using MobileMark 2002's reader test (simulating minimum usage), an outstanding result. Its 12.1in screen has a maximum resolution of 1024x768 and maintains reasonable clarity and brightness from most angles.

The X60's embedded Vodafone SIM card is what really sets this notebook apart from many competing ultraportables. Unlike somewhat bulky PC cards, the embedded SIM in the X60 is tucked away behind a panel on the bottom of the unit, while an inconspicuous aerial sits flush against the screen's edge where it is barely noticeable, let alone intrusive. With a Vodafone account and the included software it's simple to get yourself online wherever there's 3G coverage. During our tests we were able to access the Internet while on the train, in the office or sitting at home. From an inner-city location in Sydney, with good signal strength, we got an average of 40KBps download speed over a period of approximately 20 minutes. Vodafone's 3G coverage also extends beyond the Oceania region to Asia, Europe, America and even Africa. Check with Vodafone for plan costs.

Its mobility does come at a price, however. To keep the weight and size down, Lenovo has opted to exclude an optical drive. Purchasing an external DVD-RW from Lenovo will cost you around $350 on top of the already hefty price of $3899.

Despite its size, this notebook performed well in our tests. Sporting an Intel 1.8GHz Core Duo T2400 CPU and 512MB of DDR2 667MHz RAM, it got 83 in our WorldBench 5 benchmark test. An expected score of 5324 in 3DMark 2001 SE shows its Intel 945GM Express graphics chip is only capable of low-end 3-D rendering.

As a business notebook, its security features such as the fingerprint scanner and hardware-level password protection are a nice touch for anyone concerned with sensitive documents.

The magnesium-alloy chassis has the typical plain appearance of Lenovo's range, but is sturdy, light and the screen exhibits little flex for greater protection. A handy feature not seen from other vendors is a keyboard light pointing down from the top of the screen. Keys near the edge of the unit are squashed somewhat, but all other keys are comfortable to use. A track-point is employed instead of a track-pad, but it's well placed and also comfortable to use.