If you're after a small laptop that's also powerful and comfortable to type on, the ThinkPad X230 is perfect. It has an excellent, backlit keyboard and its screen is also splendid. The only thing we don't like is the touchpad, but it does have a TrackPoint that you can use instead of it.

Lenovo's ThinkPad X230 (type 2320-2AM) is a laptop that combines great portability and battery life with a powerful CPU and good connectivity and security options. It's based on Intel's third generation Core i7-3520M CPU, which provides plenty of processing power for office applications and media encoding tasks, its hard drive is quick, and it uses Intel's integrated HD 4000 graphics, which are much improved over the last generation of Intel graphics. Most importantly, the laptop has excellent usability: its 12.5in screen is bright, colourful and easy to look at from different angles, its keyboard is crisp and comfortable and it has both a touchpad and a TrackPoint pointing device.

A lot of people scoff at the design of the Lenovo and dismiss it based on its boxy looks and (arguably) out-dated shape. To those people, we say: you are missing out on a great computing experience. The ThinkPad X230 is a tool for users who are serious about their work and that's perhaps why it doesn't look like a typical consumer laptop. It has a lot of business features built in, such as a trusted platform module (TPM 1.2) for aiding encryption, a fingerprint reader for simple log-in security, dual-band Wi-Fi (Intel Centrino Advanced-N 6205), a full-sized ExpressCard slot for expansion, an interface for a docking station, built-in 3G connectivity (an Ericsson H5321 gw module), and it includes Mini DisplayPort rather than HDMI for connecting to high-resolution monitors. You also get two USB 3.0 ports, Gigabit Ethernet, a VGA port, an SD card slot, and another USB port that can be used to charge devices even when the laptop is asleep.

The chassis is compact and feels sturdy. There is no flexing or creaking evident when it's held by the corners, and it has metal hinges that keep the screen perfectly in place, and which allow it to tilt all the way back. The only concern we have about its build quality is with the bezel around the screen, which clicked out of place when we put pressure on the rear of the lid.

The base has an access panel for the RAM slots, a removable battery on the spine, and there are large rubber feet present to prevent the notebook from sliding around (and to keep the chassis in an elevated position for ventilation purposes when it's sitting flat on a desk). These feet weren't overly annoying when using the notebook in our lap. The weight of the X230 is a dash under 1.6kg, which makes it a heavy unit considering its size, but it didn't feel awkward to transport it to and from the office on a daily basis. Its power pack is about 100mm long, 30mm tall and 40mm thick.

What sets this laptop apart from most other laptops on the Australian market is the keyboard. It's one of the best we've ever used on any laptop, be it a commercial, consumer or crossover model. The keys are full-sized and have excellent travel and responsiveness. They make a soft, ear-soothing click sound when they are hit and there is no bounce or wobbling evident at all. Best of all, the keyboard is backlit with two available levels of intensity, which makes it look stunning when used in the dark. For those of us who are fans of the screen-mounted keyboard light, Lenovo hasn't disappointed: it's still present, so you can change from the backlit keyboard to the screen-mounted light whenever you please. It's great to have options. 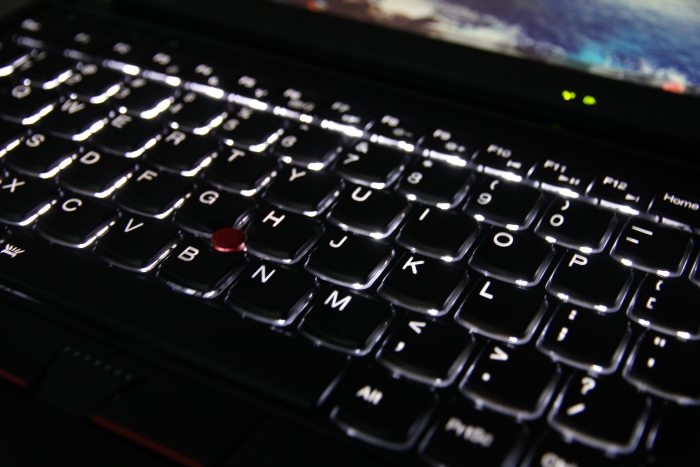 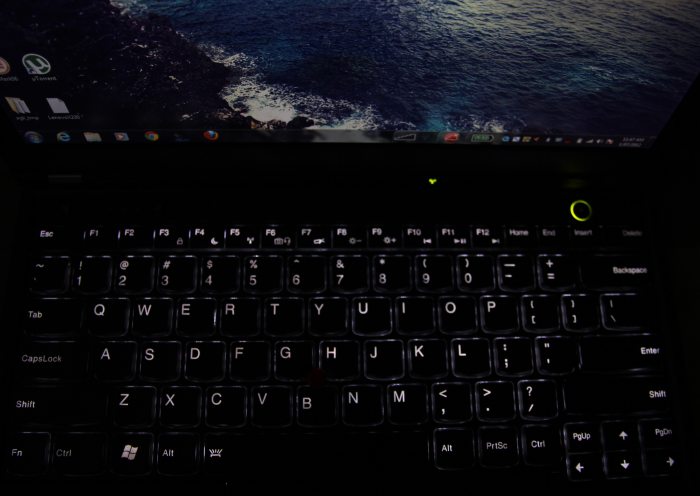 The layout of the alpha keys is typical, but the function and control keys at the bottom-left corner are swapped, with the function key being in the corner-most position. This can be changed in the BIOS. We like the arrow keys and the dedicated page up and page down keys either side of the up arrow. The dedicated print screen key and the home and end keys take some getting used to. In a nutshell though, the X230's keyboard and palm rest design are perfect if you're a writer or someone who needs to regularly prepare long documents, for example.

We like the inclusion of dual pointing devices, with both a regular touchpad and a TrackPoint device included for convenience (again, it's good to have options), and the TrackPoint doesn't get in the way while typing. However, we aren't impressed with the notebook's touchpad. It's small (which is understandable for a 12.5in notebook) and has tiny bumps on its surface that can make it irritating to use. At times, it wasn't perfect in its responsiveness — the pointer was a little shaky, especially during selection tasks and taps. We also found it awkward to perform certain multi-finger gestures, such as three-finger swiping, due to its size. The TrackPoint worked well though, and we used it when resting the notebook on our lap.

The 12.5in (Premium panel) screen of the X230 has a native resolution of 1366x768, which is fine for its size, although we would have preferred a 1600-pixel wide resolution — this resolution is not offered for the X230 as both the standard and premium screen options are 1366 pixels wide. Most importantly, it's a screen of high quality. It's bright and possesses good contrast. Furthermore, it's an IPS (in-plane switching) screen, so it has wide viewing angles; you don't have to continually change the tilt angle to view images and videos properly, and viewing from the sides is a good experience, too. The matte finish isn't prone to reflecting room lights, yet it also doesn't make the screen look dull, like some matte finishes tend to do.

Two speakers reside on the underside of the chassis, but the sound from this laptop isn't great — it's not as loud, nor as rich as the sound from other recent laptops we've seen, including the super-slim Samsung Series 9.

At this point you might look at the profile of the X230 and think that it looks a little thick, heavy and awkward. It's only 26mm thick at its thickest point, but it looks like it's thicker because of its big battery and thick rubber feet (which make it 35mm all up). The base has an ample heat sink and fan in it so that it can properly dissipate the heat that is generated by its full-voltage (35W), dual-core, third generation Intel Core i7-3520M CPU. Not many laptops of this size have a full-voltage CPU, and this, along with 4GB of DDR3 SDRAM (upgradeable to 16GB) and a 7200rpm, 500GB hard drive, give the X230 fast overall performance — it felt responsive when using it for typical office tasks, but its cold boot time was a little slow for out liking, taking around 55sec.

In our Blender 3D rendering and iTunes MP3 encoding tests, the X230 recorded 34sec and 39sec, respectively. In our AutoGordianKnot DVD-to-Xvid conversion test, and ArcSoft Media Converter 7 DVD-to-MKV tests, the laptop got times of 42min and 10min 04sec, respectively. We haven't tested a CPU of this class before, so we can only compare it to the other two third generation Intel Core i7-eqipped laptops that we've seen, the Lenovo ThinkPad Edge E530 and the ASUS N56VM, both of which are quad-core notebooks. The X230's MP3 encoding performance is actually better than those two notebooks, and its file conversion times are competitive considering the other notebooks have four more threads at their disposal.

Graphics performance is good, with the X230 recording 5091 in 3DMark06, and the notebook's hard drive speed is also impressive. In CrystalDiskMark, it recorded a read rate of 132 megabytes per second (MBps) and a write rate of 126MBps, which is swift for a 7200rpm notebook drive. In our own file transfer tests, where we duplicate data, the drive put up an average of 48.1MBps, which is a good showing. The drive is a Hitachi HTS725050A7E630 with a 6Gbps, SATA III interface and a thickness (or Z-height) of 7mm. It sits on the right side of the unit and can be easily replaced if needed. There is an option for a 256GB solid state drive, too.

While using the X230 for prolonged periods, its base didn't get overly warm, and its fan wasn't annoyingly loud. Under a full processing load, the fan did spin a lot faster and was more audible, but still not really much of an annoyance. The base will get a lot warmer when the laptop is used for tough processing tasks, and it's best to just let it rest on a flat surface so that its base can be properly ventilated during these times.

The large, 6-cell battery that sits in the spine of the notebook has a 5.16 amp-hour rating, and it produced lots of life in our tests. In our rundown test, in which we disable power management, enable Wi-Fi, maximise screen brightness and loop an Xvid-encoded video, the battery lasted 3hr 47min. It's not a bad result for a laptop with a full-blown Core i7 CPU in it and it's about 10min more life than the 15in, quad-core Core i7 Lenovo and ASUS notebooks that we mentioned earlier.

When using the notebook for regular Web browsing, document creation and occasional YouTube watching, we got a little over five hours out of it. This was with the screen brightness at around halfway, the power profile set to high performance, and with the lowest intensity keyboard backlight enabled. Lenovo also includes a battery stretch application, which can prolong battery life further by dimming the screen, changing the colour depth, reducing CPU speed and more, but it's not always practical and should only be used if you're desperate.

It should be noted that the SIM card reader sits in the battery compartment. There is no icon printed on the chassis to let you know which way it needs to be inserted — it's label facing out and notch end sticking out. Our iiNet SIM card (which works on the Optus network) was recognised immediately and we connected easily through Windows' network manager. The only thing we had to do was enter the correct APN through the connection's properties.

Overall, the Lenovo ThinkPad X230 is a small workhorse of a laptop. It has plenty of CPU grunt and lots of connectivity options considering its small size, and it's an absolute pleasure to use thanks to its excellent screen and keyboard. Its touchpad isn't great though, and we did notice some clicking in the bezel around the screen, but these are our only negatives. We think it's a terrific little laptop that's suitable for those of you who want something small and mobile that's also comfortable to work on.

Updated 10 July 2012 to clarify screen information regarding the 'Premium' panel.