Lenovo's ThinkPad X100e is a very well built, sub-$1000 ultraportable for business users. It's comfortable to use and reasonably fast, and, coupled with a global warranty, we think it's a great little laptop for travelling professionals. However, it could use better battery life.

Lenovo's ThinkPad X100e is an ultraportable notebook aimed primarily at business users who want something mobile but affordable. It weighs only 1.5kg, has an 11.6in screen and costs $999. It features one of the best keyboards in its class and it's also very sturdy.

The Lenovo ThinkPad X100e is bigger and more powerful than a netbook; it's a viable solution for anyone who has been thinking about purchasing a netbook but been put off by the size and slow CPU. The X100e's keyboard has full-sized keys — including two large shift keys — and the screen has a native resolution of 1366x768. You can type for long periods without getting tired, and the screen's resolution lets you line up two windows side by side to improve your productivity. 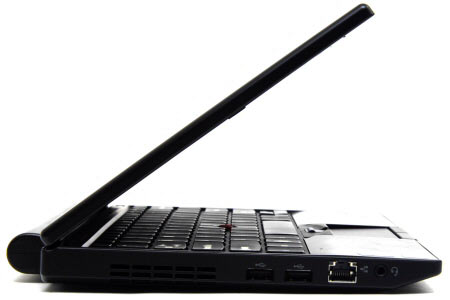 The ThinkPad X100e makes use of AMD's latest Vision Pro platform, which consists of an AMD Athlon Neo Processor MV-40 running at 1.6GHz and an ATI Radeon HD 3200 graphics adapter running at 500MHz. You also get 2GB of DDR2 SDRAM and a 250GB, 5200rpm hard drive.

The combination of the AMD CPU and ATI GPU gives the X100e better graphics processing power than most sub-$1000 notebooks, and it means you can easily use high resolutions when connected to an external monitor or TV, as well as watch high-resolution videos without experiencing any stuttering or tearing. The Radeon HD 3200 is almost 11 times faster than a netbook's integrated Intel GMA 950 graphics chip. This was shown in the 3DMark06 test, in which the ThinkPad X100e scored 1043 marks. A typical netbook, such as Samsung's N120, gets 60-80 marks. 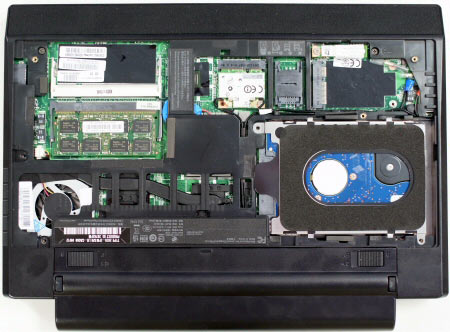 The bottom panel can be removed easily to expose the spare RAM slot, hard drive and wireless module. There is also provision for a 3G module. The screws stay attached to the bottom panel, so there is no chance of losing them.

In our WorldBench 6 benchmark, the X100e scored 49, which is approximately twice as fast as a netbook with a 1.66GHz Intel Atom CPU. Compared to slimline laptops such as Toshiba's Satellite T110, which runs an Intel Pentium CPU, the ThinkPad X100e is actually a little slow. In particular, the Adobe Photoshop and the multitasking tests took longer to complete on the X100e. We chalk this up to the Toshiba having more RAM than the X100e (4GB compared to 2GB). However, in the iTunes MP3 encoding and Blender 3D rendering tests, which stress the CPU, the X100e recorded times of 4min and 4min 24sec, respectively — almost identical to the Toshiba Satellite T110's results (give or take a handful of seconds).

Basically, the Lenovo ThinkPad X100e is fast enough for running everyday office applications, creating presentations, watching videos and undertaking some light multitasking. You won't want to do too many taxing tasks on it, such as edit large photos and chop up videos, but if you are patient enough then you can perform those tasks, too.

We've established that the Lenovo ThinkPad X100e is miles ahead of a netbook in terms of power and comfort, but its design is also a notch above, in particular the spill-proof keyboard and the solid construction of the lid and the chassis.

The X100e's keyboard has a completely new design by Lenovo; it's also featured on the company's new ThinkPad Edge notebook. The keys are raised and curved at the end in order to provide maximum tactility. They feel soft, yet responsive when you hit them, and they don't make an annoying click. Some nonessential buttons have been removed from the keyboard layout — such as Pause/Break, Scroll Lock and SysRq — which leaves more room for the rest of the keys. The only smaller-than-usual keys are the arrow keys, Page Up and Page Down (they are smaller and shallower than the other keys). 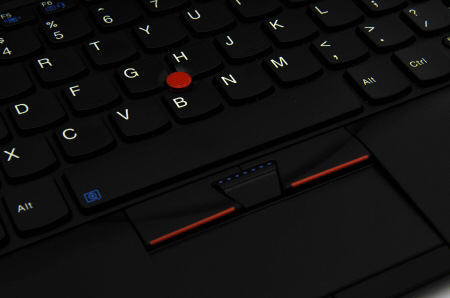 The ThinkPad X100e's keyboard is a joy to type on and the inclusion of a TrackPoint device is a big plus. It makes the notebook much easier to use when it's on your lap.

If there's one thing we absolutely love about the ThinkPad X100e, it's the inclusion of a TrackPoint device in addition to a multi-gesture touchpad. We've often wondered why vendors don't include a TrackPoint-style device in netbooks, as they are much easier to use on a small notebook than a touchpad — especially when you're using it on your lap. Lenovo has included a utility so that you can disable either device.

A hard plastic lid surrounds the ThinkPad X100e's screen; you can put pressure on the lid and twist it with reasonable force without puddles showing up on the screen. The hinges that hold the screen in place are tough and perhaps offer a little too much resistance. We also have reservations about the latch-less design of the lid: because the touchpad's buttons reside right on the edge of the base, we sometimes got caught pulling them up when attempting to open the lid. It's not a major problem, though, and the buttons are strong enough to withstand accidental upward pressure. Nevertheless, we think that a little less hinge resistance or a distinct notch that you can grip would make the lid a little easier to open. 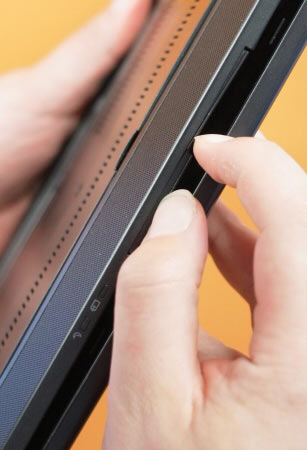 The left- and right-click buttons reside right on the edge and it's easy to pull them up when attempting to open the lid.

The screen itself possesses adequate brightness for use in a well-lit office, and you can use it outdoors, too, provided you are not in direct sunlight. We like the degree to which the brightness can be adjusted — there are 16 levels, allowing you to make the screen look almost completely dark.

For our battery test we left the screen brightness on high, enabled the wireless radio, disabled power management, and looped an Xvid-encoded video. The ThinkPad X100e's 6-cell battery lasted 2hr 37min in this test, which is an underwhelming result for an ultraportable with a 6-cell battery. However, with a dimmer screen and a conservative power management plan, you will be able to get up to three hours out of it.

The base of the ThinkPad X100e warms slightly after a few hours of use, which can be annoying. There is a fan that extracts warm air through the left side of the chassis, and the bottom panel has vents.

There are only a few essential ports on the edges of the ThinkPad X100e. You get three USB 2.0 ports, a Gigabit Ethernet port, a VGA port, a combination headphone/microphone port and an SD card slot. You don't an ExpressCard/34 slot or a built-in 3G module. You do get Bluetooth and 802.11n wireless networking, and the notebook also has a webcam and a microphone.

Aside from a couple of quibbles, the Lenovo ThinkPad X100e is a very good ultraportable notebook for anyone who wants something light, strong and comfortable to use. We wish it performed better in our battery test and that its keyboard layout was a little different, but our overall experience with this laptop was a very positive one.