A 15.6in Lenovo laptop with good speed and long battery life 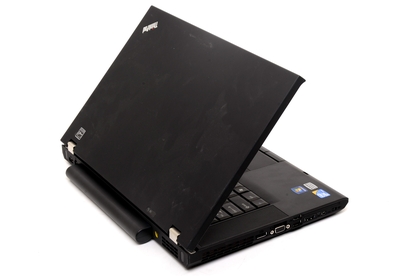 It may look drab, but the Lenovo ThinkPad T510 business notebook is well-featured, solidly built, fast, and has a long battery life. It does feel a little too heavy for lap use and its keyboard isn't completely solid, but its pros heavily outweigh those cons.

Since Lenovo bought IBM's PC and notebook business, not much of the ThinkPad's iconic design has changed, and this is a good thing. The Lenovo ThinkPad T510 notebook has the same business-like look, the same sturdy build quality, and most of the features that make ThinkPads standout from other business laptops. These features include the dual pointing devices, a screen-mounted light, and a good keyboard. However, the T510 feels heavy (especially when a 9-cell battery is installed) and not very comfortable to use while resting on your lap.

Speedy performance is delivered by the Intel Core i7-620M CPU, which runs at 2.66GHz and has two cores plus Hyper-Threading. It's great for multitasking and it will handle not only office tasks, but also more demanding ones such as video compression — and it will do so with ease. In our Blender 3D rendering and iTunes MP3 encoding tests, the ThinkPad recorded 49sec and 54sec respectively — quick results, as we expected. In our video encoding test, where we use AutoGordianKnot to transcode a DVD file to a 1.5GB Xvid file, the ThinkPad took just 1hr 1min. This is also a solid result.

Our test notebook came with 2GB of DDR3 SDRAM and the 32-bit version of Windows 7 Professional, but you can only buy the ThinkPad T510 with 3GB or more of RAM. Our test unit also featured a 7200rpm, 320GB Seagate Momentus hard drive. This recorded an average transfer rate of 30.72 megabytes per second in our tests, which is a speedy result and better than the 7200rpm drive in the HP ProBook 6550b.

Perhaps the most interesting feature of the ThinkPad T510's configuration is NVIDIA's Optimus technology. We've got a love-hate relationship with Optimus because it works well on some notebooks and not so well on others. With the T510 it does a very good job. We didn't have to fiddle around with the graphics card's options in order to get the notebook to use the built-in Intel graphics while running Windows Media Player (like we did on the MSI FX600), and that's the way it's supposed to be. Optimus is meant to automatically switch between the integrated Intel HD graphics and the discrete 512MB NVIDIA NVS 3100m graphics depending on the application that's being used.

In 3Dmark06, Optimus switched to the NVIDIA card and the notebook achieved a score of 3671. It's not spectacular, but it's indicative of a card that can run some games such as WoW and StarCraft2. You'll even be able to run car racing and sports games (such as NBA2K11). But this isn't a gaming notebook so the biggest benefit of the dedicated card is that graphics tasks can be offloaded to it and the overall system performance increased.

With a 9-cell battery, which costs $40 more than the 6-cell battery, you can get plenty of life away from a power outlet. In our standard battery rundown test, in which we disable power management, enable Wi-Fi, maximise screen brightness and loop an Xvid-encoded video, the ThinkPad T510 lasted 3hr 48min. This is a great result for a big, 15.6in notebook with a bright, high-resolution screen. When we implemented a balanced power plan, a medium brightness level for the screen and only used the notebook for Web browsing and word processing, it lasted over six hours.