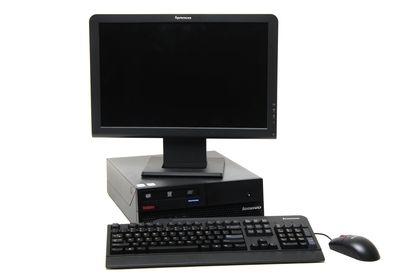 It may not be one of Lenovo's more interesting units, offering the standard chassis and mid-range performance, but the inclusion of e-SATA as well as legacy ports like serial and parallel gives this unit a broad range of connectivity that will suit some offices to a tee.

Red and black are back. The Lenovo ThinkCentre M57 (6072-ADM) uses Lenovo's standard form factor chassis, unlike the small form factor ThinkCentre A61e we reviewed recently, and dons the tried and tested black and red colour scheme. It isn't a great performer, but it does offer some extra connectivity, such as e-SATA, making it a good choice for users with large local backup needs.

It's a medium level system, offering basic performance and simple, but useful functionality. This unit has an Intel E6550 2.33GHz CPU installed, which offers a 1333MHz front side bus and a 4MB L2 cache, and there's 1GB of DDR2 667MHz RAM to play with. The system has a 160GB hard drive which should be plenty for the average user, plus a DVD re-writer is included, too.

The ThinkCentre M57 combines the old with the new. On one hand it has an e-SATA (external SATA) port, which is likely to become more and more important to the business world as large amounts of data need backing up. It is also quite helpful when trying to move quantities of data too large to be sent easily over the ether. However, the Lenovo ThinkCentre M57 also includes serial and parallel ports for backwards compatibility with older devices you may still have in the office.

Excellent for external storage, e-SATA allows data to be transferred at a theoretical maximum of 3Gbps, rather than 480Mbps on USB 2.0 or 800Mbps using FireWire, a huge improvement. Although more and more motherboard manufacturers are including e-SATA ports on their boards, it's a fairly rare site on pre-built PCs like the ThinkCentre M57. The slow adoption of e-SATA's can be laid, in part, on the shoulders of external hard drive vendors, who have only recently started to release e-SATA external hard drive enclosures en masse. The growing uptake of e-SATA will surely make it a more valuable and viable external storage option for everyone, especially in a business environment.

As usual the Lenovo ThinkCentre M57 offers one of the most manageable chassis in the business. A tool-free button release allows you to swing the chassis open like a Mach-truck cabin, exposing the inside in seconds. This is great for IT administrators who need quick access to multiple computers, saving valuable time with desk-side visits. What it's lacking in this regard, however, is room to upgrade. Although Lenovo is probably aiming for a lease-and-replace approach towards large fleets of ThinkCentres, the ability to upgrade, even the amount of internal storage, would be good. The chassis is so neatly packed that there's no room for any additions, except perhaps some more RAM.

In our benchmarks it performed with expectedly mid-range results. Although the E6550 is a good CPU, it's not running at a high default frequency. In WorldBench 6 it scored just 75, which will suffice for the average swathe of tasks like word processing and photo editing, but it's not a power machine so don't expect to do any video editing or other taxing tasks on this rig. In our MP3 encoding test, the ThinkCentre M57 performed reasonably well, taking just 75sec to encode 53 minutes worth of WAV files to 192Kbps MP3 files in iTunes. Using Cdex, which uses just one of the two available CPU cores, took 98sec.