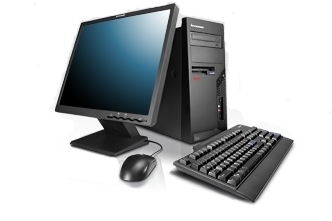 If you're looking to add a few PCs to the office or looking for something reasonably priced to do your work from home, but don't need anything flashy, the ThinkCentre will run your everyday programs without any problems. Compact enough to keep on your desk but out of the way, this low cost system is a sturdy business solution.

With business PC written all over it, the Lenovo ThinkCentre pays homage to its IBM heritage with a case design that's been tried and tested since the days of the 486. Perfect for offices or home businesses with little working space available, the compact but plain chassis can sit upright on its side or lay flat, allowing you to place a monitor on top. Although it may inspire memories of drab windowless office cubicles, the ThinkCentre design does a great job of keeping things simple and effective. The face or front panel consists of two USB 2.0 ports for quickly connecting USB keys or MP3 players, a microphone and headphones jack, not to mention a DVD re-writer. The large on/off button leaves very little space for even the most avid of computer-phobes to get confused.

Inside are an AMD Athlon 64 3500+ CPU, 512MB of 667MHz DDR2 RAM and an onboard GeForce 6100 graphics card to power you through your work. In PC WorldBench 5, which tests using applications such as Photoshop and Office, the ThinkCentre scored 88 overall. This is a reasonable score and suggests that most business-orientated software will have little problems running. We also used 3DMark 2001 SE to gauge the performance of the graphics card. In this test it scored 4993, enough to get by with basic graphical needs, but don't plan on using anything with heavy rendering requirements or playing any 3D games.

The compact design of the case means that there's almost no room for upgrading. One of the two RAM slots is used, but a maximum of 4GB of RAM can be installed, so purchase large single sticks if you intend to increase your RAM. The one and only 3.5in hard drive bay comes installed with an 80GB Seagate Barracuda (7200rpm), so increasing your storage will require a replacement, or perhaps an external storage solution. A small fan blows air directly from a vent over the hard drive and another fan similarly blows air direct from a vent via a small shroud and over the CPU's heat sink. There are a couple of expansion slots available for adding devices such as a wireless network card, and one PCI Express (16x) slot means you can beef up the graphics capabilities down the track. However, the 220watt power supply leaves very little headroom for any increased power requirements. The small fans, each pressed directly against a vent, generate a noticeable amount of noise when the system is idle, but hiding the machine away under your desk goes some way to reducing the problem.