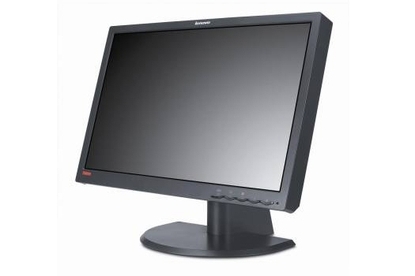 There are other -- and larger -- HD-level monitors available for the money. However, if you're looking for a really high-quality 22in display, the Lenovo L220x Wide will give you something great to look at all of the time

Lenovo's ThinkVision L220x Wide display doesn't qualify as a budget 22in widescreen display, but it represents amazingly accurate visual technology and carries a host of ergonomic features to custom-tune it to your desktop environment.

Although the Lenovo L220x Wide is HD-compatible, it lacks an HDMI (High-Definition Multimedia Interface) port. As a result, if you want to use the Lenovo L220x Wide for HD output, you'll need to either have an HD tuner or DVD player installed with your PC, or find an HDMI-to-DVI conversion cable to attach an external HD device to the monitor.

Everyone associates Lenovo with the ThinkPad series of laptops. Some even know that it has a ThinkCentre line of desktop systems. But not many people seem to be aware of its ThinkVision monitors. That's a shame -- if the Lenovo L220x Wide is any example, the company should be better known in this market.

The out-of-box experience for the L220x Wide was surprising. While we needed to tweak the colour, brightness and contrast of most displays we've tested in order to get them where we want them to be, the Lenovo L220x Wide required no adjustments whatsoever.

Setup was a cinch: Windows Vista and our HD2400 GT graphics card recognised the L220x Wide immediately and gave us a host of possible resolution settings when asked. The OSD buttons are front-mounted and labelled with colourful icons so you won't mistake their functions.

DisplayMate loved the Lenovo L220x Wide. There were no stuck pixels, colour was deep and rich, detail in white areas was fine -- except for the whitest regions, but even there, it was no worse than you'll find at the consumer level.

The Lenovo L220x Wide produced distinct grey levels all the way down to the darkest level of the scale. Most consumer monitors will give up some detail at these extreme visual regions. The official numbers are 325cd/m2 brightness and 1200-1 contrast ratio, both excellent.

There was no blooming, no blur -- in fact, nothing to complain about after ad hoc testing on the Internet and with graphics, gaming, live TV and DVD playback.

The native resolution for this 22in display is 1920 by 1200, which is the ideal resolution for 1080p "true HD" video. However, there's a catch. Along with four USB ports, Lenovo provides only D-Sub and DVI connectors for analogue and digital signals (respectively). A spare HDMI input would be appreciated for external HD devices -- it's the only thing that detracts from an otherwise superb product.

None of that affects the computer usability of the Lenovo L220x Wide. In fact, it's probably one of the most versatile monitors you're likely to run across. It tilts and swivels and has a height adjustment as well. It also pivots for portrait and landscape modes. Although achieving the rotated view is sometimes dependent on the level of graphics card you're using, Lenovo supplies the software that should do the job if your equipment is up to it.

What may give you pause, however, is the price.