A 10.1in netbook that includes a Splashtop interface Physically, the Lenovo IdeaPad S10-2 is a run-of-the-mill netbook without anything to make it stand out from other mini-notebooks on the Australian market. However, it includes a fine implementation of Splashtop, which allows you to use the netbook for Web browsing and other basic tasks without booting into Windows.

Lenovo's IdeaPad S10-2 is a simple 10.1in netbook that can be used for browsing the Web, creating office documents, viewing photos and watching standard-definition videos. It's small (25.8x19.3cm) and has small keys (16mm wide) but it is not too uncomfortable to use. Its biggest selling point is the inclusion of a Splashtop interface, which allows you to use the netbook even without booting into Windows.

The screen of the IdeaPad S10-2 is glossy and prone to reflecting room lights. It has a native resolution of 1024x600, which is a little higher than the 1024x576 resolution of other netbooks in Lenovo's stable, including the IdeaPad S10e. It could stand to be a little more vibrant when displaying photos and videos, and its vertical viewing angles are a little too narrow.

The chassis is solidly constructed and very slim — approximately 17mm thick. It doesn't get overly warm when it has been running for a long time, and its cooling fan is quieter than many of the other netbooks we've tested. What we really like are the access panels that allow you to easily change the RAM and hard drive.

The Lenovo IdeaPad S10-2 has a small but responsive touchpad. The palm rest area is also small, which means that long stretches of typing might be tiring. There is some wasted space above the keyboard that is used to house the power button, shortcut buttons and indicator lights. We wish Lenovo moved the keyboard up and relocated the indicators and buttons to give the palm rest more space. As it stands, the IdeaPad S10-2 is not too uncomfortable to use in short spurts. 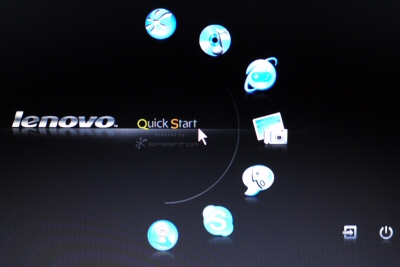 Splashtop allows you to browse the Web, use instant messaging, talk on Skype, view images and listen to music without booting into Windows XP.

The version of Splashtop that Lenovo has employed is comprehensive and it can be invoked by pressing the QS button above the keyboard when the netbook is off. It takes about 25 seconds to boot into Splashtop and from there you can browse the Web, use instant messaging and Skype, and even listen to MP3 files or view photos that are stored in your hard drive. We were able to connect to the Internet in a matter of seconds, although the interface for connecting to a Wi-Fi network could be more intuitive (the options for wireless encryption are hidden by default). Our biggest gripe with Splashtop is the super-sensitive cursor. It traverses the screen way too fast and there is no option available to slow it down.

The IdeaPad S10-2 ships with Windows XP as well as Splashtop. Running on a 1.6GHz Intel Atom N270 CPU, 1GB of RAM, integrated Intel GMA 950 graphics and a 160GB hard drive, the laptop is very responsive when launching applications and navigating menus. However, it is slow when used for media encoding and multitasking. It took 8min 59sec to complete our iTunes MP3 encoding test, which is even slower than the IdeaPad S10e (8min 22sec). In the Blender 3D test, we recorded a time of 7min 03sec, which is an expected time for this CPU under Windows XP.

We installed Windows 7 Release Candidate (Built 7100) on the IdeaPad S10-2 using a USB key. The installation took around 25min and the majority of the netbook's hardware was found automatically by the new operating system. We only had to install Lenovo's power management utility, which we found on the second partition of the hard drive (in the drivers folder). It's worth noting that the Splashtop interface will still be usable even after you install Windows 7, as it's located on a chip on the motherboard instead of on the hard drive.

After using the netbook with Windows 7 for a while, we noticed that its video performance was sluggish; videos weren't playing back smoothly and menus took a long time to redraw in some programs (Blender 3D, in particular). We had to update the graphics driver to version Ver:15.12.75.3.1912, which can be obtained from the downloads section on Intel's Web site. Once this new driver was installed, graphics performance on the S10-2 was much better.

The IdeaPad S10-2 looks different to the IdeaPad S10e. It has more of a rounded look compared to the squared edges of the S10e, and it also doesn't have an ExpressCard/34 expansion slot. This makes it a little less desirable, especially for businesses that require an ExpressCard slot for a data card or other external device. You still have three USB 2.0 ports though, as well as a D-sub (VGA) port, an SD card slot, headphone and microphone jacks, and a 10/100 Ethernet port (using a Realtek RTL8102E controller). You also get 802.11n wireless networking (through an Intel WiFi Link 5100 AGN adapter), a webcam, and Bluetooth.

A 6-cell battery sits along the spine of the IdeaPad S10-2, and it lasted 3hr 21min in our test. This test disables power management, enables the wireless radio and loops an Xvid-encoded video while the screen brightness is maximised. We expected a result closer to four hours, which is what the IdeaPad S10e recorded. With this big battery, the overall weight of the S10-2 is approximately 1.3kg (which is similar to the S10e).

The right side of the S10-2 (left) compared to the S10e (right). The ExpressCard slot is missing from the S10-2, and you can see that is has an even higher rear profile than the S10e.

A SIM card slot is present in the battery compartment of the S10-2, but this can't be used as there is no built-in 3G module (there is an empty slot for one in the chassis), nor built-in antennas. An option for a 3G module that can be used with any carrier would make this netbook stand out from a crowd, but at the moment, there is nothing about the S10-2 to draw anyone's attention. The slightly rounded design and the huge 6-cell battery that sits on the spine of the S10-2 make it look just like another generic netbook. It's also disappointing that Lenovo took off the ExpressCard slot.