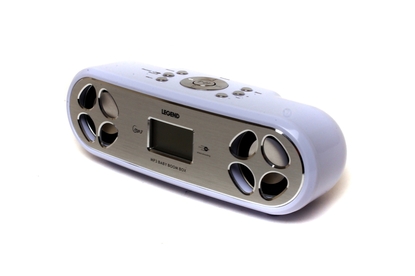 The Baby Boom Box is an ideal multi-purpose digital music device for those on the road.

The Legend Baby Boom Box is a surprising addition to the digital music market. A combination device, it offers MP3 playback from SD cards and the internal memory, as well as a line-in port and an FM radio. As a multi-purpose product, the Baby Boom Box succeeds quite well, and will satisfy those looking for a music solution to use in a wide variety of situations.

The best feature of this device, believe it or not, is the sound quality. Despite being one of the smaller speakers we've had through the office lately, the audio produced by the Baby Boom Box was impressive. Most small speaker sets offer tinny audio with no bass and a complete lack of punch. The Baby Boom Box however produced rich, full music, with great bass and excellent detail. It managed to achieve volumes more than adequate for a small to medium sized room, and there was no distortion until we hit the higher volume levels. We did notice the audio tended to suffer a little if we weren't right in front of it, as the small speakers aren't capable of directing sound in a large arc, but a few limitations are expected on a unit this size.

Our other favourite feature of this device was the line-in port, which allowed us to use it as a personal speaker system for our iPod, rather than just a standalone digital music player. This makes it a great device to carry around to parties or the beach for example, allowing you to not only share your music, but other people's too. The line-in also allows you to record music directly from someone else's MP3 player, which is an awesome feature. It does have to be done in real time, but sharing music amongst friends has never been so easy.

The unit itself comes with 512MB of internal memory, along with an SD card slot, which allows for further expansion. It supports MP3 and WMA formats and can handle DRM encrypted files.

It has little in the way of features however, with just basic a basic repeat mode along with a bass boost function and four pre-set equaliser options (with no ability to tweak the settings). There are no playlists and no shuffle mode.

Design wise, the Baby Boom Box is fairly standard looking. It has a dull-white colour scheme, with a silver face plate and controls running along the top. They are comprised of a five-way directional pad, volume controls, a source key, and menu, bass and repeat buttons. Meanwhile, the small, monochrome LCD screen rests on the front, nestled between the two speaker cones. The interface on the whole is fairly easy to use and while it can be a little slow to respond on occasion, it shouldn't pose any problems.

You have the choice of running the Baby Boom Box off either AC power or the internal battery, which recharges automatically when plugged in. This means it can occupy a permanent spot in your room or be taken on the road with equal ease.