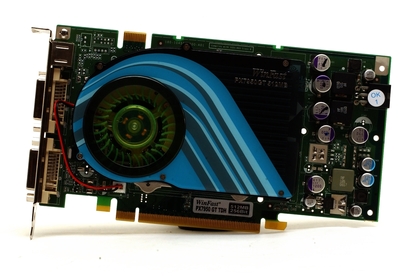 Although this isn't the top of the range, its slightly lower performance is negligible, especially when weighted with the price drop. If you're looking for a card to last until you purchase a new system with everything you've ever dreamed of, this card is a great option.

NVIDIA has just released their new flagship card with all the bells and whistles to take us into the next generation of gaming. But if you're just looking to upgrade from a low-end system and aren't planning to blow your budget on a top of the range card right now, the LeadTek WinFast PX7950 GT TDH, based on NVIDIA's GeForce 7 Series, is a sensibly priced solution that will still boost your frame rate and give you something to work with until it's time to roll out a whole new system. We took a look at the standard edition, but a slightly more powerful Extreme edition is also available.

Because this card is based on the G71 chip (built using a 90nm manufacturing process), the very same that brought us all other NVIDIA 7900 cards, including the recently superseded flagship model the GeForce 7900 GTX (GV-NX79X512DB-RH-ED), you can be assured that you're going to get a fairly good performance. Though performance wasn't quite up to that of the 7900 GTX, based on the recommended retail price this card is slightly cheaper.

It's immediately clear that there are some physical differences in the cards. Unlike the bulky fan and heat pipe combination that cools the 7900 GTX, this board has a modest 60mm fan supported by a basic heatsink and takes up only one PCI slot. The board is also noticeably shorter than its older brother, giving you more leeway if you've got a cramped case. We seem to find that the high-end ATI cards tend to be rather noisy, where NVIDIAs cards are a little quieter. Despite the smaller size of the fan, the PX7950GT TDH also has fairly low noise emissions, especially when idle, which can be a blessing when you're not gaming.

Other than the physical comparison, the only real difference between this card and the high-end 7900 GTX is in the clock speeds. Both cards have 24 pixel pipelines, 8 vertex pipelines and use 512MB of GDDR3 memory. The 7950 GT has a core clock speed of 550MHz and a memory clock of 700MHz (1400MHz). Both the core clock and memory are a good 100MHz slower than the 7900 GTX. However, in our benchmarks it pulled off scores that suggest it should handle most of what's out on shelves without too much problem. And against our chosen card of comparison, the 7900 GTX, it had noticeable, but also negligible score variations. In 3DMark 2006 it scored 4259 compared with a score of 4487 from the 7900 GTX. In FEAR's in-game benchmark, with maximum quality settings, including 16x AF (anisotropic filtering), 4x AA (antialiasing) and a resolution of 1280x960, it averaged 56fps (frames per second), eight frames less than the GTX, but still extremely playable. In Quake 4 at a resolution of 1280x1024 in high quality settings, it averaged 70fps, five frames less than the GTX. One other nice addition that you'll benefit from this card's release is compliance with HDCP copy protection, for those planning to use their PC to watch high-definition media.