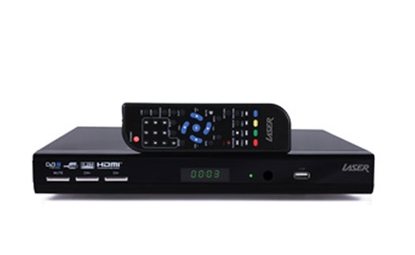 The Laser STB-HDM2000 performs about as well as can be expected for a $79.95 set-top box. The PVR functionality could be better, but for the asking price you can't really go wrong.

The Laser STB-HDM2000 is a high-definition set-top box with PVR functionality. It comes with a front-mounted USB port that allows you to record television programs onto a thumb stick or external hard drive (sold separately). When the $79.95 price tag is taken into account, the Laser STB-HDM2000 is a very reasonable proposition. It's not perfect, but the majority of its flaws are perfectly manageable.

[Compare the Laser STB-HDM2000 to other set-top box reviews on PC World.]

The Laser STB-HDM2000 sports the kind of pedestrian black design synonymous with entry-level set-top boxes. It measures 30x250x50mm, which is around average for a device of this calibre. With the exception of the USB port, all connectivity options are located at the rear, comprising composite video, component (RGB), S-Video, coaxial digital audio and HDMI.

The included remote control is constructed of light, cheap-looking plastic. However, it is surprisingly responsive and benefits from an intelligent button layout. Unlike some remotes we could mention, the volume and channel buttons are distinctly shaped and sensibly positioned, which is helpful while watching TV in the dark. On the downside, the user interface is a little sluggish — especially when it comes to the electronic program guide (EPG). Adding to the frustration, you have to press the Exit button whenever you wish to leave a sub-menu (i.e. there's no 'back' icon onscreen).

To test the Laser STB-HDM2000's playback performance, we hooked it up to a Samsung Series 9 LED television via HDMI. The Laser STB-HDM2000 took around five minutes to find the TV and radio stations in our area — slightly longer than we're used to. The tuner missed several TV stations on our first run-through, although this probably had something to do with the quality of our aerial.

Picture quality was fair, with the set-top box able to output at 1080p or 720p for HD stations. We did notice occasional pixelisation on some channels, but it wasn't enough to detract from the overall viewing experience. The Laser STB-HDM2000 is equipped with one digital tuner — which means you can’t record two channels simultaneously. While this is a shame, it would be churlish to expect anything more for the asking price.

To assess its PVR functionality, we used a Hitachi XL Desktop Drive with 2TB of storage. The hard drive was instantly recognised by the Laser STB-HDM2000, which was a pleasant surprise. Recording TV shows is a fairly straightforward process, with the ability to set specific times and schedule multiple recordings at once (recordings can be made once, daily, weekly or monthly). Our recorded files looked crisp during playback, with no audio sync issues.

When playing back files the Laser STB-HDM2000 hit a few minor snags, however. Recorded shows are represented by a nondescript file name and icon, with no options to preview a file before playing it. Naturally, this quickly gets confusing if you've amassed a collection of files from the same TV station. The fast-forward function is 2x only, which can really drag during long recordings. The Laser STB-HDM2000 supports a handful of media files including JPEG, MP3, AVI and DivX. We were unimpressed by the quality of DivX files, which looked blurry and ugly during playback.

All in all, the Laser STB-HDM2000 is a flawed device that is bound to cause a few headaches. Nonetheless, it remains an acceptable choice if you require a dirt-cheap PVR.