Laser DAB-DG200AM review: An inexpensive digital radio that can also tune in to AM and FM stations 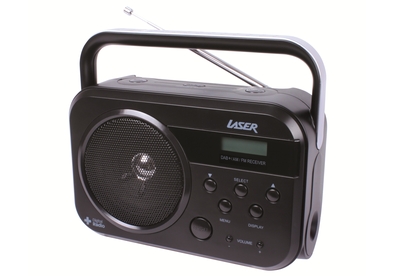 The Laser DAB-DG200AM is a cheap digital radio that also has the ability to tune in to AM and FM stations. Its design and audio quality aren't great, but it's a decent enough unit for everyday, casual listening.

The Laser DAB-DG200AM is a hybrid radio that can tune in to digital radio stations as well as AM and FM stations. It's a single speaker radio with very basic controls and a two-line LCD display. It sounds, feels and looks cheap, but that's because it is. It costs $99, which makes it one of the most affordable hybrid (digital and analogue) radios on the Australian market. Crucially, it performs its intended functions with a minimum of fuss.

The radio is pre-tuned. To start listening to digital radio, all you have to do is extend the antenna and press the up and down arrows to change stations. A two-line LCD screen shows you the name of the station that you are listening to on the top line, while the details of the station or the track information scroll past on the second line.

You can press the mode button at the top of the radio to switch to AM or FM stations, but these aren't pre-tuned so you will have to set up some presets. Up to 10 presets each can be saved for digital, AM and FM stations. You'll have to consult the manual for how to do this, as it involves up to three buttons, but it's not complicated.

The sound quality of the radio isn't great. It has only one speaker and it just sounds too flat overall. That said, it's not horrible to listen to, and the volume can fill up a small room, but you shouldn't expect very deep bass and crystal clear treble. For everyday listening, it's fine. There is an output jack, so you can attach headphones or plug the radio in to an amplifier and listen through external speakers.

The tuner was a little temperamental in my tests though, as the radio would often stop playing when I moved it around. It performed fine when I left sitting in one place. If you want to use the Laser as a portable radio, you'll have to invest in six C batteries and this is handy for using the radio outdoors or on a job site. I just used it with the supplied AC adapter at my job site, which is my desk.

The performance of the radio was inconsistent during my tests. Sometimes station changes were swift, but most of the time it took up to three seconds to start playing the next station. This was only a frustration while channel hopping until I found the station I wanted to listen to — I didn't change channels much after that.

However, my frustration with the design of this radio was present throughout my testing. The handle at the top of the radio is fixed in place and can't be folded over. This can make it a little hard to access the buttons at the top of the unit. All the buttons on the radio feel too shallow and the volume buttons are way too small — they are the smallest buttons on the unit, while the on/off button is the by far the biggest.

Overall, the quality of the Laser DAB-DG200AM isn't great, but it's one of the cheapest options on the Australian market for accessing digital and AM/FM radio in one unit. If you want something with great audio quality and good looks, this isn't for you. If you want something basic that will allow you to tune in to some cool new digital radio stations while you work in the garage, the kitchen, or on a job site, then by all means go for it. I tuned the Laser to the Mix 80s digital radio station for the writing of this review and had a jolly good time — I even performed some bad (not meaning good) dance moves in between paragraphs.