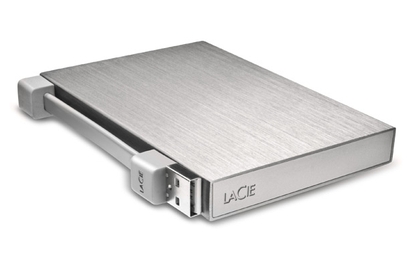 The LaCie Rikki Go is arguably the most stylish portable hard drive on the market. It's durable, tiny and comes with handy software. Recommended.

The LaCie Rikki Go is a 2.5in ultraportable external hard drive that boasts the smallest dimensions in its class (75x109x13mm). The version we tested came with 500GB of storage (a 1TB version is also available for a $70 premium) and a USB 2.0 interface. According to LaCie, speeds can be increased by up to 33 per cent via the company's USB Boost driver.

The LaCie Rikki Go is a durable and stylish looking product that will easily fit inside a road warrior’s pocket. It also comes with some handy features, including automated backup software and access to 10GB of free online storage (for one year only). It’s not the fastest hard drive on the block — particularly when it comes to transferring lots of small files — but LaCie’s Rikki Go remains a good choice for style-conscious users. It's also surprisingly affordable for a product of this calibre, retailing for just $129.

LaCie is renowned for producing some of the flashiest PC hardware on the market; geek chic for chic geeks. Its official Web site almost reads like a fashion catalogue, boasting frequent collaborations with renowned artists and designers. (Check out our reviews of the LaCie Hard Disk Design by Neil Poulton and d2 Blu-ray drive — don’t they look "fierce"?)

The LaCie Rikki Go is similarly steeped in style, boasting exceptionally sleek dimensions and finished in brushed aluminium. It is elegant yet rugged — a bit like Hugh Jackman in the musical The Boy From Oz. The disc-shaped indicator light is an equally attractive touch. 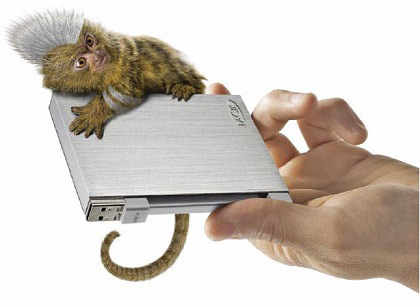 Curiously, LaCie has chosen to illustrate the size of the Rikki Go by comparing it to a monkey

Our only issue with the Rikki Go’s design is its integrated USB cable: it’s far too short for our liking and the rubber doesn’t bend well, which makes it difficult to connect to a PC. Fortunately, the cable can be removed in favour of a regular USB cord.

As mentioned, the LaCie Rikki Go comes with an additional 10GB of remote storage, courtesy of Wuala. This online service allows you to store and backup files, sync media across multiple computers and share nominated folders with friends. The 10GB plan costs $29 per year, with 12 months included free of charge with the Rikki Go (you can cancel your subscription or revert to 1GB after the year is up).

To test the LaCie Rikki Go’s transfer speeds, we copied files back and forth between the drive and our testbed equipped with a 300GB Western Digital Velociraptor drive. We also copied the folders from one location on the Rikki Go to another, to test its speed when simultaneously reading and writing files.

The first test consisted of 3GB worth of 1MB files, which simulates installing applications and backing up system files. In the second test, we used a 20GB folder of 3-4GB files, including high-definition movies. Let’s take a look at how it compared to other external hard drives on the market:

As the above table shows, the LaCie Rikki Go isn’t the fastest of hard drives, but it isn't disastrously slow either. In our small file transfer tests, the drive put in an average performance compared to the competition, with slightly slow write speeds. However, in our large file transfer tests, the LaCie Rikki Go stacked up favourably; particularly when it came to write speeds. (Note: LaCie's USB Boost software does not support 64-bit operating systems, which may explain why some of our results were a bit sluggish. If you're using a 32-bit OS, expect an increase of 5MBps or so.)

The LaCie Rikki Go remained whisper-quiet during operation and was also cool to the touch. For the asking price, it's hard to complain about this stunning looking hard drive. If you're frequently on the go and care about appearance, the LaCie Rikki Go is well worth picking up.