While only an average performer in 10Gbps USB, this tiny, featherweight SSD from LaCie is fast enough and one of our favorites 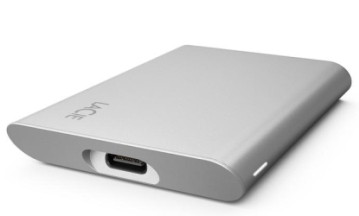 While only an average performer among 10Gbps USB drives, the LaCie Portable SSD's unique and attractive design, as well as its svelte form factor make it one of our favorites.

*500GB  and 2TB options currently not available in Australia.

Two mildly-surprising things about the LaCie Portable SSD: its small size and its feather-like heft. I like a bit more weight with SSDs, but I'm fully aware that this is a minority preference. I find it rather handsome, too. As for it's performance, it's not the fastest but it's competitive with other drives out there.

The silver-hued Portable SSD with USB-C is styled basically like a squashed rhombus, thin and aggressively slanted. The drive is a mere 0.417-inches thick, 1.969-inches wide, 3.15-inches long, and weighs a mere 1.45 ounces. About the only other physical detail worth mentioning is the thin power/activity light on the right side of the unit (looking at the Type-C connector) shown below.

Note that while its USB-C designation (it's not an official appellative) tells you that there's a Type-C port in use, it tells you nothing about the actual version of USB implemented. In this case, it's 3.2 Gen 2 10Gbps with NVMe internals. More properly, the Portable SSD is Superspeed USB 10Gbps with a Type-C connector. (The USB forum has been tragic in its naming conventions since day one and common usage remains so.)

The Portable SSD is available in 500GB, 1TB, and 2TB capacities priced at US$130, US$210 / AU$298, and US$370 respectively (500GB  and 2TB options currently not available in Australia). Not bad for a handsome product that looks right at home alongside your Mac. You might be able to roll your own external drive using an NVMe SSD and a Type-C enclosure for a bit less in the two larger capacities, but probably not so stylishly. If you are inclined to DIY, note that all but the slowest NVMe drives are fast enough to saturate the USB 10Gbps bus. In other words, just about any budget NVMe SSD will do.

The LaCie Portable SSD is warrantied for three years with free data recovery. We have seen a few external drives lose data (most likely bus voltage spikes) so data recovery really is a nice perquisite for external drives. Most of these failed drives could be reformatted and used again, though never again quite trusted. Such is life.

Though the Portable SSD attained 1GBps reads and close to that writing on PCWorld's test bed in synthetic benchmarks, 500MBps was the rule during the real world testing under Windows and it only managed 740MBps on our 8GB M1 iMac under BlackMagicDesign's Disk Speed Test .

The latter test test isn't always 100 percent accurate, however. Ad hoc copy tests gave around the same results. Shown below are the Disk Speed tests with the drive formatted to its default exFAT, and then HFS, which offered only a very mild improvement. 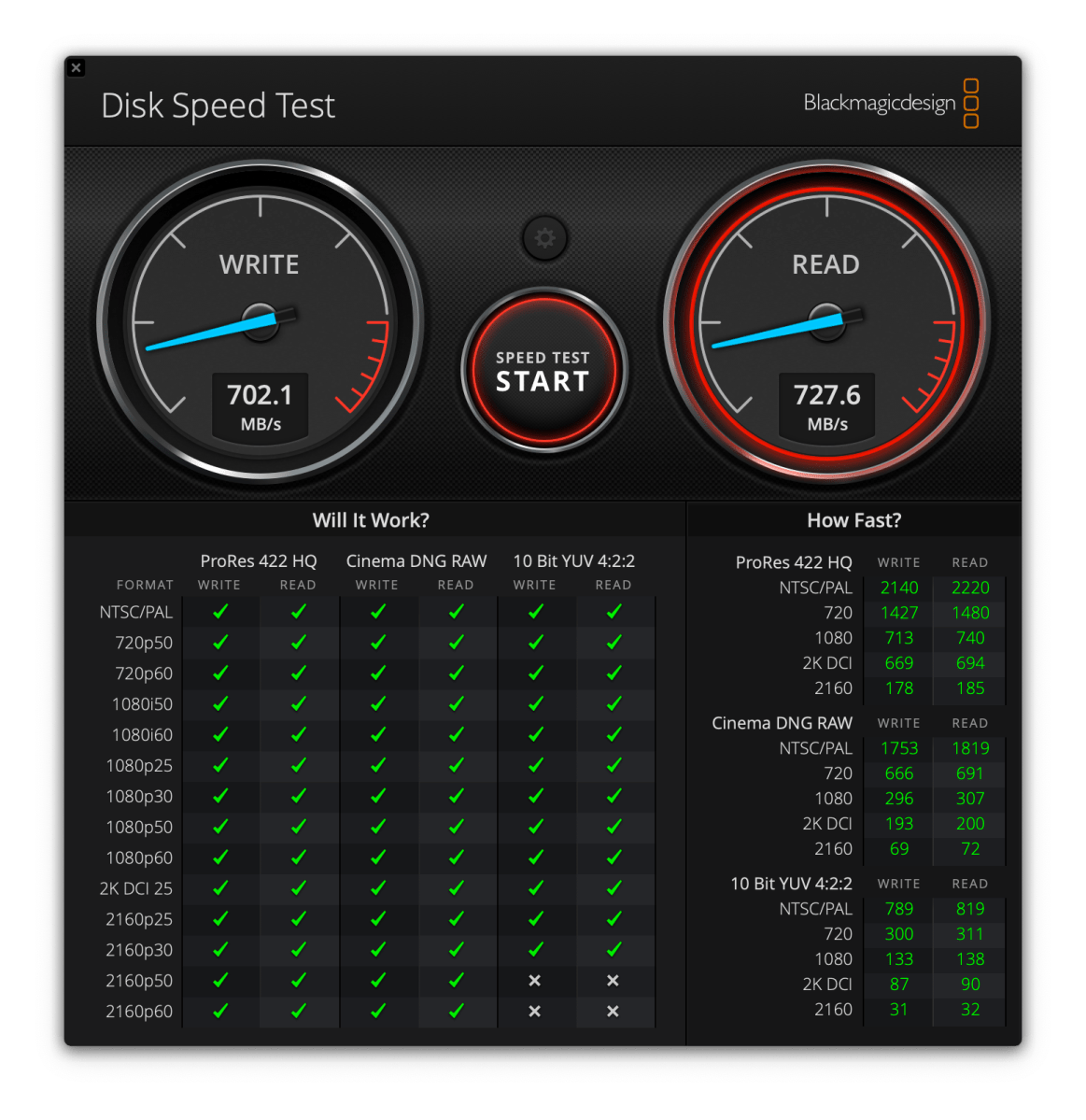 Above are the test results with the LaCie Portable SSD formatted to exFAT (standard). 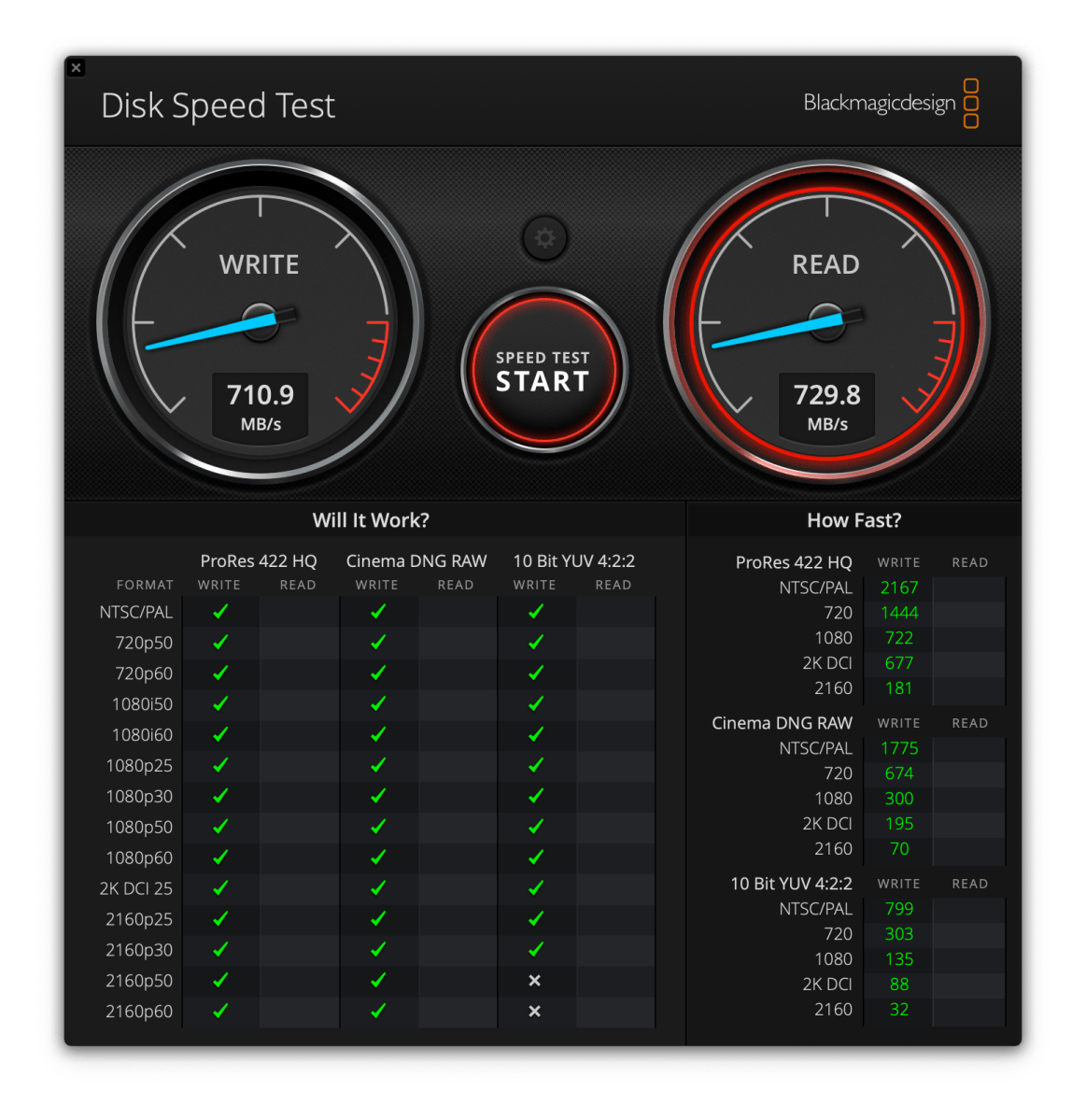 The LaCie Portable SSD speed when formatted to HFS+ is little changed.

The PCWorld testing was a bit more revealing, though real world transfers proved almost the same as Disk Speed Test. Basically, the LaCie Portable SSD is a 600MBps to 700MBps reader, a 600MBps small data set writer, and and a 425MBps sustained writer with larger files. That's plenty fast enough for most tasks and only a slightly slower than the fastest drives.

I should also mention that the drive was only mildly warm during out 450GB write test. Some older drives will cook an egg during this test.

The LaCie Portable SSD was right there with the competition in CrystalDiskMark 6.

The LaCie Portable SSD did well if not stellar in the 48GB transfer tests.

Though not the fastest at writing 450GB, the LaCie Portable SSD was within shouting distance of its competitors. Forget the tragic Crucial X8 which slows to a crawl when it runs out of NAND cache (3-bit NAND treated as 1-bit NAND.)

As you can see below in this capture from the 48GB single file write, the Portable SSD runs out of cache fairly quickly. But drops only to around 450MBpsâ€”still a more than decent write speed for 10Gbps USB. It also maintained this 450MBps pace in the above 450GB write. 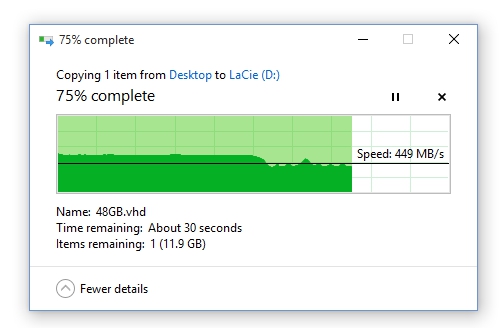 Buy the Portable SSD for its diminutive size, light weight, good looks and competitive if not record-setting performance. (I would've killed for a drive this fast 20 years ago). There are faster drives available, but not in this small of a form factor, or that appear so where it belongs next to your Mac. Good stuff from LaCie.