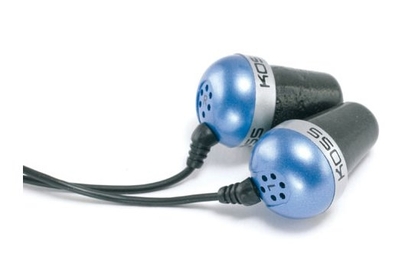 The sound quality is quite good, but the Plug feels flimsy and doesn’t do the greatest job in regards to noise cancellation.

Very few things in life are more enervating than being force-fed someone else's idea of music at high volume, while you are sharing a train carriage, office or bus. Funnily enough few people who have such antisocial tendencies seem to enjoy soothing music.

Now there's a solution: with the Plug, Koss has taken a fresh approach to escaped noise. These headphones feature what the manufacturer describes as 'slow memory ear cushions' or, as we describe them, 'bits of foam'. Either way, you simply compress the squidgy earpiece, insert it in your ear and let it expand to 'plug' your aural canal. This should then prevent noise leakages.

The Plug is undeniably comfortable to use - and the sound quality was several notches up from our usual headphones. Unfortunately, according to several innocent bystanders, there wasn't an appreciable difference in the amount of noise that escaped at high volume.

The headphones themselves feel pretty flimsy. Lightweight and plastic, they do have a generous 4ft cable. While some will find this useful, the thin wire only added to the general aura of fragility the Plug exudes.

You get four foam cushions - so you can afford to lose a couple of them - but they're quite small and easy to misplace. And it's fair to say the styling leaves a little to be desired, although they will be hidden snugly in your ears. Most importantly, the fact that they aren't iPod white is a definite plus as far as we're concerned.

It's an interesting idea but it's not brilliantly executed. Sound quality is good and the price is right. However, the Plug feels flimsy and we found that a similar amount of noise escapes as would from a conventional set.