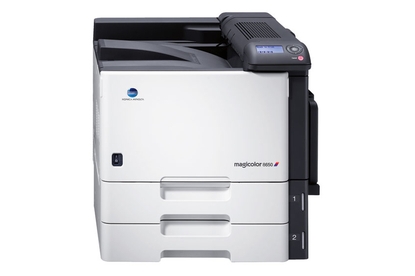 Once you're over the initial set-up hurdle, the MagiColour 8650DN is a top-notch printer for design studios.

The Magicolor 8650 is an A3 colour laser printer with exceptionally high-grade output that would make an ideal proof printer for many design studios. It has its flaws — it's especially fiddly to set up, for example — but on a day-to-day basis it's got everything you need.

The 8650DN is the base model in the range, but features more than most base units. There are two 500-sheet paper trays, and a full 1GB of RAM built-in as standard — which are often add-ons on other units.

You can build it up to Dalek-size with a cabinet of either two more 500-sheet trays or one 2500 sheet monster — but the standard model offers enough for most creative studios.

Setting up the 8650DN on your network using the provided software is easy, especially on the Mac, where support for Apple's Bonjour makes installation very simple indeed. However, getting designs and artwork to appear in the high-quality, colour-managed way you'd want is tricky.

Colour management is controlled in the printer driver, and setting the right output parameters is fiddly — while the manual is no help at all. Once you've worked out that the 'DTP' mode selection gives you highest-quality, colour-managed output without fiddling with lots of buried settings, you're set for the rest of the printer's usable life — but it took us a lot of trial-and-error to get there.

The 8650DN isn't the nippiest printer at producing pages, but when they finally emerge, they're top-notch. Colours are reproduced accurately using the printer's internal profile, and profiling the device makes it even more accurate. Profiling also revealed that the 8650DN has an impressively wide colour gamut, so much of your output will match what you see on screen — and it's capable of emulating press standards more accurately (in theory, anyway).

One nifty feature in the driver is the ability to emulate press standards such as SWOP and EuroScale, though we weren't able to test how accurate these were.

Despite not licensing Adobe's PostScript (it uses its own emulation), we didn't have any problems with printing documents with complex vector graphics.