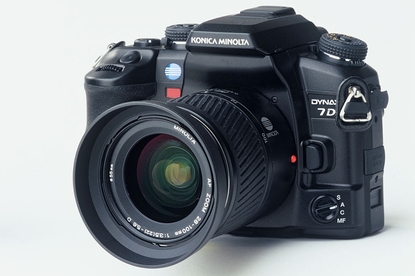 The Minolta 7D offers a profusion of manual controls and an innovative anti-shake feature, but its image quality was sub-par.

Although many of the digital SLRs that we have tested have a plentiful supply of buttons, the Konica Minolta Maxxum 7D probably has the most: 24 dials and buttons spread around the camera. But this approach has a big upside: it makes the controls much easier to get to. For instance, on many cameras the LCD menu is required to access the exposure or flash compensation settings, but the Minolta 7D puts these controls on two dials on the left side of the camera body. Likewise, additional controls--a button for switching between autofocus and manual focus, a dial for changing metering modes, and a dial for selecting the white balance mode--enable the user to make further adjustments with their thumb without taking their finger off the shutter button, or their eye from the viewfinder.

In our tests, the Maxxum 7D produced images with accurate and bright colours when using a custom white balance and manually adjusted exposure setting, and its test shot taken with the built-in flash scored very high. However, the indoor test shot taken without flash did not produce results as good.

All the 7D's images looked a little soft. However, although the 7D began to show noise when we increased the ISO to its maximum of 1600, this noise was much less noticeable than that of produced by many other cameras, and was visible only as a mild mottled pattern in areas of flat colour.

The 7D has built-in anti-shake technology, which lets the camera compensate for minor movements while you're taking a picture. Some high-end lenses for other cameras include optical stabilisation (where an element inside the lens moves); the 7D instead moves the CCD sensor into the camera body to compensate for movement. We found the feature to be reasonably effective: although it can't compensate for major movements, it did overcome the slight blurring that can be caused by shaky hands or long lenses. It was less effective in low-light situations that require a longer exposure. A visual indicator shows up in the viewfinder when the camera thinks that antishaking won't work.

The auto ISO feature (where the camera picks the most appropriate ISO setting) is another rare addition. Again, we found it to be reasonably effective at picking an appropriate speed for most situations.

A good selection of lenses is available for the camera. However, the range is not as wide as what's available for Canon or Nikon cameras (or for some of the Fujifilm FinePix series, which use Nikon lenses). The kit we looked at included a 28mm to 100mm lens, but the body can also be purchased alone.

The camera is powered by a single 1500-milliampere-hour rechargeable battery, which lasted for 278 shots taken over a period of roughly 2.5 hours. That's probably enough for a good day's shooting, but it's significantly less than other SLRs we've tested.

We liked the large 2.5" LCD monitor on the 7D: it was bright and made previewing the pictures easy. There is no display on the top of the camera: information such as the shutter speed and aperture setting is shown on the LCD instead. One nice touch: the f readout automatically rotates when shooting in portrait mode, making it easier to read.