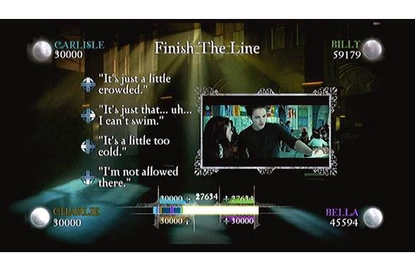 Because of my age (21) and my sex (male), I am not a primary candidate for Twilight-ification. In fact, I'm almost convinced that I have a genetic predisposition to despise the cheesy romance and angsty vampire melodrama. The way my younger sister described it, it sounded like trashy Buffy fan-fiction except much, much worse. But I became curious as to why Twilight was such a huge deal and with my morbid curiosity piqued, I started reading the novels. At first, I read it with the detached interest of a curious observer but soon, I became hooked. I lived in a state of denial for a while, going so far as to create an alternate Twitter account dedicated solely to trashing the series but it wasn't long before I had to admit to myself that I actually liked Twilight.

You might be wondering why, and no, it isn't because of the hyper-stylized movies: While this may sound ludicrous, I fell under Twilight's spell because there is a surprising amount of depth to the story and characters, a fact best embodied by the romantic chemistry between the two main characters, Bella and Edward. I found their relationship particularly noteworthy because Edward is such an interesting character. To an outsider, he can come across as nothing more than a pale pretty boy with perfect hair and cheek bones -- blame the producers of the movies who pushed star Robert Pattinson's most obvious features at the cost of actual character development -- but to Twilight fans in the know, Edward is a complex character who turns from a mushy boyfriend into a relentless badass at the drop of a hat. His playful ribbing of Bella's non-stop nervousness and their "Forbidden Love" is unexpected yet natural, and it's a surprising feat of characterisation on the part of creator Stephanie Meyer.

Unfortunately, the movies, which are getting far too much of the attention from both outsiders and fans alike, have reduced the cast of otherwise interesting and worthwhile characters to sexy, and in the case of the male leads, mostly shirtless caricatures who do little more than mumble mindless platitudes while looking pretty on screen. Still, it's easy to see why the slickly produced and strategically cast movies are so popular with the target tween demographic (and the surprising outlier groups like middle-aged women), and it's the popularity of the film franchise that almost ensures Scene It? Twilight will sell a fair number of copies. The game relies almost entirely on the first movie for its trivia material -- it curiously ignores New Moon, which is strange considering their release dates roughly coincided, but I'm guessing they're just saving up material for a follow-up title -- and as such, it serves as an excuse for fans of the movie to revisit it again and again. Thankfully, the lengthy list of questions dig deep into the franchise's lore with brutally specific trivia that adequately rewards those who know the film inside and out; questions involving things like Edward's birth year, for instance, require a deeper level of knowledge but it shouldn't prove too taxing to most Twilight fans.

As is the norm for the series, Scene It? Twilight mostly features multiple choice questions that have you filling in missing lines of dialogue, matching actors to characters and identifying who said what to whom. To shakes things up, the game occasionally has you racing against the other players to place scenes in chronological order, or buzzing in first to identify a character in a blurry image. Like past iterations, the categorical variety keeps each round interesting for you and your three Twi-hard couch competitors. But what's unfortunate is that the same level of care and consideration wasn't put into the rest of the game: while the trivia questions do a good job of appealing to fans, the presentation leaves a lot to be desired. Considering the relatively high production values of the movie, not to mention the other installments of the Scene It? series that have been developed for other consoles, it's a little sad that Wii owners are treated to plain white text on glum and foggy backgrounds. The repetitive music and monotone narration also suck some joy from what could have been a raucous and fun party game.

I also found myself enjoying Scene It? Twilight on a rather shallow level: the title simply reinforced my obsession by allowing me to geek out over the minutia of the first film but it didn't add anything significant to my overall enjoyment of the series. A game of this nature has the potential to instill a lasting appreciation of the finer details but instead, it only temporarily reinvigorates your interest in the events of the first movie. It's enough to satisfy anyone who's invested themselves in the tween-drama, but as a fan of the series, I couldn't help but wish it were something more. Still, it's a decent way to get a small dose of Twilight in with a couple of your friends on a lazy afternoon and the diehard tweeners will no doubt be too entranced by the game's stock of film clips to notice or care.