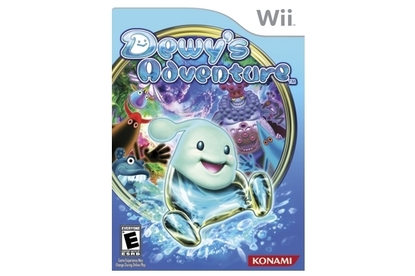 The game is great graphically, especially considering how quickly the environment responds to climate changes, though the hyper-cute characters and level designs may turn off many. Had the physics been less dramatic, we probably would have had more fun with it. Instead, the game is just too frustrating for its own good, which is strange considering its kid-friendly vibe.

Everyone remembers the feeling of leaping away from a goomba, and leaning frantically to the side as if moving your entire body will somehow make Mario jump farther out of the way.

Back then, leaning meant nothing to your character, but with the advent of the Wii, your movements actually have an impact on the game. Say what you will about Dewy's Adventure's rainbow cute factor, it certainly takes good advantage of the Wii's motion-sensing capabilities.

To help Dewy--a little water drop who's trying to save the world--finish his adventure, you hold the Wii Remote sideways, classic controller style, and tilt it to tilt the world, making Dewy slide around. It's basically the same idea found in the PSP cult-hit LocoRoco.

But, there are some interesting twists. By hitting up on the directional pad, you can raise the landscape's temperature and change Dewy into an immobile cloud that can stun enemies with lightning. If you press down and lower the temperature, he becomes a slippery block of ice that can decimate enemies with a combo attack. Each of these transformations is on a timer as the temperature slides back toward equilibrium, requiring you to act and think fast. The landscape also reacts to the temperature, and you will often need to keep this in mind when solving puzzles.

Unfortunately, for all its charm and interesting controls, the game is seriously hard. It requires a large degree of precision and finesse in your movements--a single misstep and you can wave goodbye to Dewy. The A button will in theory stabilise Dewy, but it doesn't always save you. The constant falls will send you into a frustrated rage as you're thrown to the beginning of a particularly tricky platforming sequence for the twentieth time.

It's too bad because Dewy's Adventure is an interesting and inventive 3D platformer.