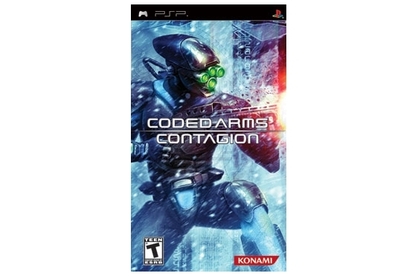 Coded Arms: Contagion was a passable shooter that ended up being mediocre. The game works and we got a minor amount of satisfaction completing higher level missions in the story mode. However, the clunky menus, gun fire that sounds like a woodpecker trapped in a metal trash can, and freeze-framing of the character in the middle enemy assaults are just more examples in which there just wasn't enough effort put into Contagion. The fact remains that just because it is a portable game doesn't mean our standards have been lowered.

When we have an issue with computers we generally rely on the ability to smack it until it does what we want it to. Admittedly it's not the most efficient or effective way of handling matters, but that just means we get excited when we play a game like Coded Arms: Contagion.

The premise of the game is similar to the first title in the series: download into a computer and take a hands-on approach to problem solving. If only the ability to teleport inside a machine were possible in the real world, then all the world's problems would be solved... but at the cost of a repetitious, mediocre and uninspired experience.

Stop and burn the roses

The game is visually impressive, though repetitive level design gave us little reason to stop and smell the roses and lead us to run through as quickly as possible. There is incentive to explore thanks to numerous hidden objects that can be used for levelling up attributes. Unfortunately, we had to spend more time figuring out how to get the object than should be necessary, rendering exploration cumbersome.

Coded Arms controls are poor and make taking on enemies tiresome and needlessly difficult. The control scheme is standard--the analogue nub takes care of movement while the buttons aim--but there is a delay in response time, so the main character feels like he's moving through heavy syrup. If an enemy spawns behind him, he's going to get pummelled. The lock-on targeting is also problematic as it only targets the closest enemy on screen. If an enemy is half hidden by a box, then it will not lock on to them and instead lock on to the nearest fully visible one, even if they are in the background and pose no immediate threat.

Less depth than a trashcan

The ability to hack computer systems in the game adds depth, but also proves to be a minor annoyance. To hack a computer requires finding a terminal and pressing the right shoulder button to open the interface. This is awkward because that button is also used for firing weapons, and you will often find yourself wastefully firing bullets at a wall.

It's also not enough that the computer being hacked has machine gun turrets as a defence against you while you hack, if the hack fails then the interface window closes and an enemy spawns right behind the character. This system of punishment for failure is thoroughly frustrating and makes the hacking just feel gimmicky.