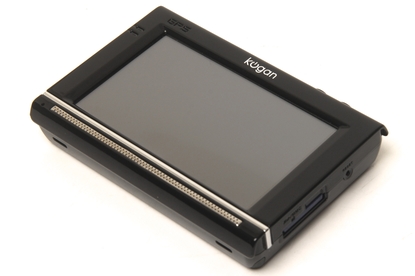 Kogan's EziNav GPS device is a great option for those who need GPS navigation but don't want to pay an inflated price.

Part of the company's competitive line-up of inexpensive products, Kogan's EziNav GPS is a great budget GPS unit. It offers a positive navigation experience as well as a few extra features.

Something immediately noticeable about the EziNav GPS unit is its lack of style, however. The device screams "budget" — from the mysterious lack of "Kogan" branding anywhere on the unit's packaging, to the tacky design and plastic feel of the unit itself.

Fortunately, although style may have suffered, the feature set hasn't. Despite a bargain bin asking price, the EziNav boasts red light and speed camera alerts, integrated Bluetooth and multimedia playback. The lack of SUNA traffic compatibility and text-to-speech navigation may deter purchasers, but the EziNav GPS unit boasts all you need for basic navigation.

Though the main menu's colour scheme is questionable, it is easy to use, with large buttons and a simple set of options that cater to novices. The navigation screen itself is somewhat cluttered, however. The EziNav GPS device uses Nav N Go's iGo My Way for navigation, a Windows CE-based solution commonly used in PDAs.

Keyboard input is surprisingly responsive, and there is none of the keystroke lag that some budget models suffer from. As the user types an address the letters that do not correspond to possible addresses are eliminated, eventually leading to five or fewer choices from which the user can pick the desired destination.

Equipped with the SiRF Atlas-III processor found in Magellan's Maestro 4250 — built on the ever-popular SiRFStarIII GPS receiver — the unit is generally fast enough for normal navigation use. GPS signal acquisition averaged just under 3min from a cold start, with warm starts halving acquisition times to 1min 30sec. Routing calculation times were also quite fast, with the EziNav GPS unit able to provide a route to the desired destination within 10sec.

There are some issues with map redraw rates when zooming in or out, but for the most part the user interface is very responsive.

A Media option in the device's core menu offers users the choice of listening to music or viewing pictures, movies or e-books. The EziNav GPS's format support is acceptable, but the quality of the speaker and screen make the device unsuitable for frequent use as a multimedia device.

Bluetooth connectivity is included and it is implemented well. We managed to pair the device with an iPhone 3G. Audio quality during calls is decent, though the speaker distorts at high volume levels, which can be an issue when attempting to raise the volume above road noise or a noisy engine. The call recipient also observed a humming noise during our test calls, though surprisingly they did not hear their own voice echoing regardless of the speaker volume level.

Though its brand and design might deter some people, the EziNav is a great budget GPS unit for basic navigation.