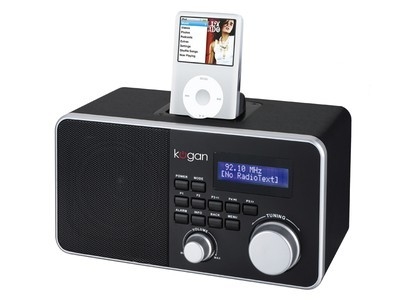 The Kogan Digital Radio with Wi-Fi and iPod Dock is a product that's chock-full of features. If you're going to use all of these on a daily basis we'd recommend it, but if you're looking for a stylish tabletop radio there are better choices on the market.

The Kogan Digital Radio with Wi-Fi and iPod dock has the widest range of features included in any of the digital radio we've reviewed, plus it is also one of the cheapest. Unfortunately, it suffers from a few design and construction flaws.

We'd describe the styling of the Kogan digital radio as conservative. Along with the Kogan logo, the button functions are printed above the buttons themselves — the font is easy to read, but it’s a little generic for our liking. A small volume control sits beside the larger multifunction dial, which is used to tune stations or make selections from the screen. Making selections from the screen was a little tricky, as the back-lit LCD screen only displays two-lines, making the selection information hard to read.

The user interface of Kogan's digital radio is relatively simple to use. It's similar to interface on the OXX Digital Classic DAB+, with a mode button to switch between FM, DAB+ and other multimedia functions. The Kogan digital radio only has five presets, which isn't ideal if you like to switch between your multiple stations settings quickly. A nice feature is the two independent alarms which can be set and linked to different sources — for example, you might want to listen to digital radio on weekdays, but wake up to streaming Internet radio on the weekend.

In our tests, one annoyance we discovered was the screen brightness. For daytime use it's more than adequate, but at night or in a dim room the bright blue light quickly becomes fatiguing. There’s no brightness control in the menu and the backlight still glows at half brightness when the radio is turned off. If you plan keep the Kogan digital radio in your bedroom as an alarm clock, then you may find the screen brightness a turn-off.

Sound quality from Kogan’s digital radio offering is not spectacular. It’s a single speaker unit (not unlike other digital radios we’ve tested) that provides a decent mix of mid-range and treble sound, but it’s a little muffled at low and high volumes. There is no audio adjustment in the menu either, so you’re stuck with default sound settings. The Kogan digital radio has a maximum volume loud enough to fill a medium-sized room, but distortion becomes evident at high volumes. The volume control is also inconsistent at lower volumes — it was silent for the first few clicks of the knob, then it suddenly cuts in at a much louder volume than what we expected.

The extra features of the Kogan Digital radio — namely the Wi-Fi and iPod dock — are useful additions. We liked the inclusion of an iPod dock in the top of the player, and the USB port makes playback from flash drives easy. Wireless networking allows connection to a Windows PC’s shared media folders or direct Internet streaming of podcasts and radio stations.

Kogan’s Digital Radio with Wi-Fi and iPod dock is a digital radio with a good range of features for a low price. It’s not as refined as other digital radios we’ve reviewed, but it’s a great budget-conscious purchase.