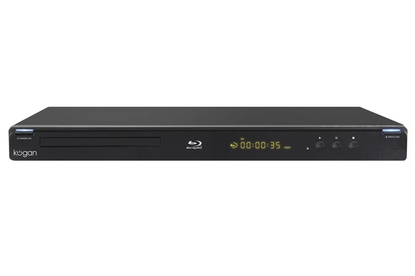 The Kogan Blu-Ray Player Wi-Fi BD 2.0 Full HD 1080p is a solid all-rounder for the asking price. Fans of BD Live will be particularly impressed by the inclusion of Wi-Fi in such an affordable product.

As its name implies, The Kogan Blu-Ray Player Wi-Fi BD 2.0 Full HD 1080p adds inbuilt Wi-Fi to the existing model. Otherwise, this is much the same product we reviewed earlier in the year, but with a sleeker, more attractive design.

In terms of appearance, the Kogan Blu-Ray Player Wi-Fi BD 2.0 Full HD 1080p has undergone a complete makeover. It's a considerable improvement over the Kogan Blu-ray Player Full HD 1080P (Profile 2.0), measuring 430x38x230mm and sporting a much slicker finish. In our humble opinion, the player's aesthetics stack up against pricier models from Sony and Panasonic. Finally — a budget Blu-ray player that can take pride of place in your home theatre system.

If we have one qualm about the design, it's that the power button is directly above the disc loading tray, where you would naturally assume the eject button to be. (For the record, this seems to be a common design quirk with Blu-ray players; see the Panasonic DMR-BW750). The included remote is also a bit cheap-looking compared to the player; but it is quick and responsive.

The Kogan Blu-Ray Player Wi-Fi BD 2.0 Full HD 1080p comes with all the usual connectivity options. As well as stereo and 7.1 analog audio there are coaxial and optical outputs for the cable-conscious. Video is equally diverse, with HDMI, composite, S-Video and component analog outputs. A front USB port is also included for playing assorted media files from an external HDD or thumb drive (AVI, DivX, MP3, AAC, JPEG, BMP and GIF are all supported).

To test the Kogan's playback performance, we watched the Blu-ray version of Braveheart on a Pioneer KURO PDP-C509A plasma TV. We didn’t experience any issues with the movie, which exhibited suburb image quality throughout. The magnificently staged battle scenes are awash with colour, with no noticeable jaggedness or image tearing marring the chaotic spectacle. Both 24 and 60 frame playback modes are supported, so you can select from either smooth or film-like visuals.

DVD playback was slightly less impressive, but remained superior to a standard-def player. (Like most Blu-ray models, the Kogan Blu-Ray Player Wi-Fi BD 2.0 Full HD 1080p can upscale DVDs to 1080i.) Once again, Kogan has provided region-free playback for DVDs, which means you can purchase your movies online from nearly anywhere in the world.

The Kogan Blu-Ray Player Wi-Fi BD 2.0 Full HD 1080p retains its predecessor's menu interface, which remains attractive and easy to use. Setting up a wireless connection could not be more straightforward: simply enter the Network List and the available connections will appear within seconds. The player is also reasonably fast, taking around 35 seconds to load a Blu-ray disc.

All in all, the Kogan Blu-Ray Player Wi-Fi BD 2.0 Full HD 1080p is a solid, fully featured Blu-ray player that offers an enjoyable movie playback experience. However, if you're not interested in Wi-Fi, you may be better off with Kogan's ultra-compact Blu-ray Player Slim, which lacks Wi-Fi, but costs $50 less.