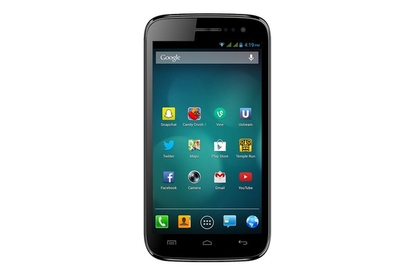 The Kogan Agora HD smartphone combines a good display with solid performance and retails for a hugely competitive price. It's only let down by a lack of internal memory and below average battery life, but still comes highly recommended for anyone on a budget.

Kogan's previous Android phone was widely panned as a dud, but the company is back with a new variant, once again claiming to offer outstanding value for money. This time around, the Australian online retailer seems to have learnt its lessons from the past. The Kogan Agora HD smartphone combines a good display with solid performance and retails for a hugely competitive price. It's only let down by a lack of internal memory and below average battery life, but still comes highly recommended for anyone on a budget.

A bland but functional design

The Kogan Agora HD isn't going to win any design awards, but given its budget price tag, that was never the intention. The phone combines glossy, black plastic on the front and sides, and a basic matte black finish on the removable battery cover. This thin battery cover feels flimsy when removed and does creak when pressed in various places, but it's a minor issue. We can't really fault the Agora HD's design otherwise, though keep in mind that this is on the large scale for a smartphone, an industry-wide trend.

The matte finish on the back provides good grip and makes the Agora HD comfortable to hold.

The matte finish on the back of the Agora HD can attract some grubby fingerprints if your hands aren't clean, but it provides good grip and makes the Agora HD fairly comfortable to hold. The comfort stems from rounded edges that taper inwards from the sides to the back of the handset, a design that's very similar to Samsung's Galaxy S4.

The Kogan Agora HD has most of its ports and controls in the usual places, with the exception of the top-mounted micro-USB port. That location means it won't play nicely with most charging docks, but given the limited amount of accessories that will be available for this phone, it's not a significant issue.

The micro-USB port sits next to a standard 3.5mm headphone jack on the top, while there's a volume rocker on the left, and a power/lock button on the right. The buttons provide good tactility, though could have been positioned a little lower to avoid stretching your fingers when using the Agora HD single-handedly. Three capacitive buttons (menu, home, back) sit below the display on the front and are responsive when pressed, while a small notification LED is cleverly hidden inside the speaker grill above the screen.

The screen is bright and produces vibrant colours.

The Agora HD's 5in 720p touchscreen is the highlight feature of this device. While the IPS display isn't as truly vibrant as the super AMOLED panel Samsung uses on the Galaxy S4, that phone costs four times as much as Kogan's offering.

The Agora HD's screen is bright, displays relatively crisp text, and produces vibrant colours, a far cry from most budget smartphones we've seen in this price range. Our only real complaint is the automatic brightness setting, which is very erratic and best switched off, and the fact that the glossy surface is tough to keep free of fingerprints. The screen is also prone to glare under fluorescent lighting indoors, and sunlight legibility is below average, but these are minor issues given the low asking price.

The user experience will be familiar to anyone who's used an Android phone.

The Kogan Agora HD runs a relatively stock version of Google's 4.2 "Jelly Bean" operating system, so the user experience will be familiar to anyone who's used an Android phone before. There's a few extra touches, headed by an range of new toggles in the notification window. These can't be edited but in addition to the standard suite of Wi-Fi, Bluetooth, GPS and airplane mode, Kogan has added data connection, data usage, audio profiles, screen timeout and auto rotation toggles.

Audio profiles is one of two features that you won't find on many other Android phones. The setting allows one of four predefined profiles to be selected, including silent, meeting and outdoor. Only the main "general" profile can be edited, but the ability to quickly toggle silent, vibrate and outdoor (loudest ring) profiles is a nice touch on a budget smartphone. The Agora HD also comes with the ability to set the phone to power on and off at predefined times. The on/off schedule can be set to repeat on a particular day, similar to how a repeat alarm works.

These two features aside, the Agora HD runs much the same as any standard Android phone. You can browse the Web, download apps through Google's Play Store, access services like YouTube, Facebook and Twitter and play games like Angry Birds and Candy Crush Saga. The icons for some core apps, like gallery, camera, phone, contacts, messaging, and calendar, have been changed for no apparent reason, but this aside, they are all Google's standard applications and work as normal.

The Agora HD's overall performance is impressive considering the price tag. The 1.2GHz quad-core processor, and 1GB of RAM results in a largely lag-free experience, and general use is quick and speedy. Apps open quickly, home screens are smooth to scroll through and although some UI animations can appear a little slow, the Agora HD feels snappy for everyday tasks. The Agora HD can become a little sluggish when updating multiple apps through the Google Play Store, but this is a minor issue.

The Agora HD runs most graphically intense games without any issues. It handled FIFA 14, Deer Hunter 2014, and Dead Trigger without any significant lag or delay, offering smooth and fast game play. Unfortunately, the most significant drawback of the Agora HD, particularly if you will be using it for gaming, is the paltry 4GB of internal memory. While the device has a microSD card slot to expand the on-board storage, many apps from Google's Play Store can only be installed on the system memory, not an external microSD card.

The Kogan Agora HD comes preloaded with a few extra apps including a backup and restore app that will move personal data and apps to and from a microSD card, a basic file manager, an FM radio, a music player, a handy quick start guide, a sound recorder, a to do list, and a basic video player. A nice touch is the fact that the default messaging app comes with built-in Emoji support.

The Kogan Agora HD supports the 850MHz and 2100MHz 3G network bands in Australia so it's suited primarily for use on the Telstra network. We managed download speeds of up to 13 megabits per second (Mbps) on Telstra's Next G network in North Sydney, with upload speeds averaging 2.7Mbps. The Agora's second SIM card slot only supports 2G networks.

Conveniently, the SIM management option in the main menu allows you to switch SIM card slots on and off, select which SIM supplies data for the phone, and also allows you to edit the name and colour of each SIM slot. The Agora HD's dialler features two call buttons, one for each SIM card slot.

Most camera shots are spoiled by excessive image noise.

The Agora HD comes with an 8-megapixel rear-facing camera, but still photos are default set to a maximum of 6-megapixels with a 16:9 aspect ratio in the camera application. You can change the aspect ratio to 4:3 to take a full 8-megapixel image.

Photos are about what you would expect from a phone at this price range, with most shots spoiled by excessive image noise. The Agora HD performs particularly poorly outdoors, especially in both bright and low light conditions, though it is capable of capturing decent macro shots. A 2-megapixel front-facing camera works well enough for video calls but predictably captures poor quality photos.

The camera application is slightly different to the stock Android one, and offers plenty of different camera modes. Among the highlights include HDR, smile shot, and multi-angle view modes, along with a face beauty mode that captures two images, one normal shot and another that attempts to smooth skin tones. For full HD video, the Agora HD offers a customisable time lapse setting, and features a range of live effects including big eyes, big nose, small mouth, and small eyes.

Perhaps the only downside to the Agora HD besides its lack of internal memory is battery life. While less frequent users should be able to achieve a full day of use before requiring a recharge, we struggled to push the 2000mAh battery through a full day, often having to reach for the charger after 14 hours.

The Kogan Agora HD quad-core smartphone is available to order now through Kogan's Web site. In addition to Australia, the Agora HD smartphone is also available in the US and the UK for US$189 and £149, respectively.