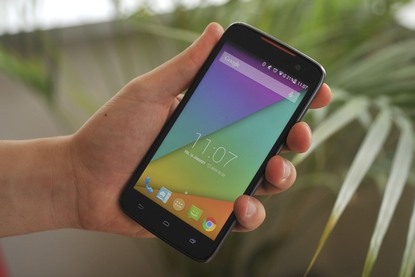 Serial discounter Kogan has released the second generation Agora 4G+, a BenQ manufactured smartphone that aims to deliver top-tier features for a low $239. Several subtle improvements have been added to the second gen smartphone; some for the better, others for the worse.

Rest the two smartphone on a table alongside one another and it’s hard telling them apart. Not updating the appearance of an iPhone doesn’t hurt the brand because the aesthetics of metal and glass continues to resonate for a second year. The Agora 4G+ however, with its flashy red-on-grey accents and its plastic bumpers, wasn’t the best looking smartphone when it was first released. Time has not helped its cause.

Most of the hardware hasn’t been changed, though that’s not necessarily bad. The 5-inch screen, with its HD resolution and a 294 pixel-per-inch density, returns, and although it no longer leads the market, it is still good enough to hold its ground against today’s competition.

Inside BenQ has recycled the 1.2GHz quad-core CPU and the smartphone continues to support 4G. Setting the Agora 4G+ apart from its forefather is twice the RAM at 2GB and internal storage at 16GB.

More storage can be added with a microSD memory card. The 4G+ wouldn’t recognise our Sony 64GB class 10 card, which is why we don’t recommend using any microSD card greater than 32GB.

Read more Google Nexus 6: Hands-on with the most expensive Nexus

The Agora 4G+'s gaming capabilities came as a surprise. Real Racing 3, which is an intensive game that has an 831MB footprint, ran smoothly and without fault.

Everyday use didn’t fare as well. Most of the time the Android 4.4 KitKat operating system will be handled with ease. Unfortunately there are moments that reveal the hardware is straining with the near-naked software. These moments manifest in animation judder or in momentary lag. The Agora 4G+ might have twice the RAM and storage of the leading low-end smartphone, the Motorola Moto G, but it fails to run as smoothly.

The sizeable improvements don’t tend to all of the camera’s problems. High contrast situations flushes colour and detail from either the foreground or background of photos — you can’t have them both in focus. There’s also a great deal of image noise spoiling photos taken at night.

Updating the camera has kept the Agora 4G+ in-line with its competition as the former 8MP camera was well below-par.

Built into the body of this smartphone is the same 2500 milliamp-hour battery found in the original. Adding parts that demand more power without making its software any more economical has lowered the Agora’s battery life. Good Gear Guide used it as our primary smartphone for a week and found the battery, under moderate use, would not last longer than 20 hours.

The Kogan branded and BenQ-manufactured Agora 4G+ does many things well, but no single part of it is great. Everything about it, from the design to the performance, settles for ordinary. Its saving grace is a price that undercuts the quality phones from Motorola, Nokia, ZTE and Huawei, though we don’t think that’s enough anymore.