This cheap LED TV has a big screen and attractive design 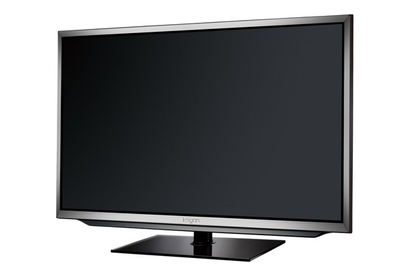 Kogan's 50-inch LED TV may be a generation behind the big names, with a refresh rate that occasionally blurs fast-moving video, and 3D which sometimes doesn't look great, but it's still a reasonably large screen with acceptable picture quality for a low price.

Kogan has been making strides over the past few years, driving the prices of its home-brand TVs down while making them thinner and better-looking and including higher-quality components.

The Kogan 50-inch 3D LED TV is one of the best-looking units the company has produced. It doesn’t have any particularly unique styling cues — a dark silver brushed aluminium bezel, slightly thicker at the base to hide stereo speakers, and a dark glass stand — but it looks well-constructed and generally pretty modern.

Four HDMI ports means this Kogan TV has as many digital video inputs as the best televisions on the market. If you need this many ports, you’re probably too high-end a buyer to be looking at a Kogan television in the first place. Older devices can use the VGA, composite or component connectors.

The 50-inch also has two USB 2.0 ports on the side that can play a small variety of compressed music, movie and picture files from USB portable hard drives or flash drives. Both USB 2.0 and USB 3.0 drives are supported.

Being a Full HD display, the Kogan 50-inch 3D LED TV is able to display a good amount of detail when you’re watching a high quality free-to-air digital TV broadcast — our usual favourite being a recorded session of Formula 1 — or a Blu-ray movie.

The screen has an acceptable level of contrast in its default settings, being competitive with other budget sets like the Toshiba TL900A and the LG LM6410. You’re also able to get a bit more detail out of the 50-inch 1080p display by reducing the brightness, contrast, and sharpness slightly. We did notice a bit of blurring in scenes of fast motion, like some of the wide panning shots of Avatar.

The 3D effect that the Kogan TV can create is generally OK, although the glasses that Kogan supplies are slightly bulky with small lenses. It's a good effect that will distract the kids for the length of a movie, but it's not up to par with more expensive passive systems like the ones you'll find at the cinema. There is very minor flickering in fast-moving scenes.

As is standard with most budget TVs and most edge-lit LED TVs (as this one is), the Kogan 50-inch 3D LED TV’s screen loses a bit of detail from the darkest and brightest scenes of our The Dark Knight and Batman Begins test Blu-ray movies, and the end credits of each movie display some blooming around white text on a black background. These issues aren’t unique to the Kogan, and they’re hardly problematic, but to avoid them you’ll need to spend more money on a plasma or back-lit LED TV.

The display of the Kogan 50-inch TV is not especially glossy, which means it’s good for a bright day-lit room where there might be direct light sources like windows or lamps shining at the screen. If you point a torch at the screen you’re able to see its reflection reasonably clearly, but it’s not as distracting as on a glossy set like the LG 55LM9600.

The speakers built into the Kogan 50-inch 3D LED TV aren’t great. They’re acceptable at low and moderate volumes, although they don’t have a great deal of power and are mainly useful for dialogue rather than music. High and maximum volume playback does make the speakers sound distorted, so we’d use an external sound system if you plan to use this TV in a large living space or boardroom.

The Kogan 50-inch 3D LED TV is simple, reasonably attractive, and has a good quality LCD panel given its affordable price. At a couple of hundred dollars cheaper than its direct competitors, it’s good value, although if you’re willing to spend slightly more than that few hundred dollars, you get into the territory of excellent value screens like the Panasonic ST50A.