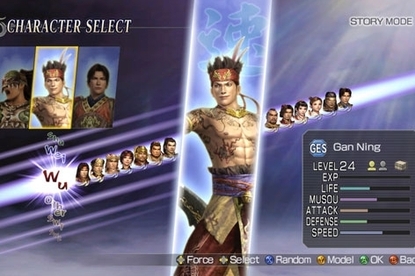 When it comes down to it, Warriors Orochi is more a mediocre tribute to past games than a fresh experience. Unimpressive graphics, a mundane fighting system, and a slate of characters borrowed from other titles leaves Warriors Orochi a stale appetiser left on the plate as you wait for the Dynasty Warriors six main course.

Prepare yourself for a feast of mashed buttons as Warriors Orochi dishes out a heap of hack-and-slash action. You'll slice and dice the Asia of old in this hybrid button-masher, but unfortunately, the game's monotonous action and lacklustre presentation offers little sustenance.

The single player story mode consists of four separate campaigns--one apiece for the three kingdoms Wei, Wu and Shu as well as feudal Japan--all geared toward taking out the warmongering Serpent King. Familiarity with these series isn't required to jump into the game, but you will need a thumb up for the challenge of repeatedly jamming the face buttons. You control a trio of warriors, switching among them on-the-fly using the triggers. Each character can execute basic, charged, and special musou attacks; in short, expect to mash the same three buttons over and over again.

Although mostly adhering to basic button-mashing practices, Warriors Orochi attempts to add a tactical dimension to combat. Warriors belong to one of three categories: power, speed or technique. As such, you'll want to select a balanced team before heading into battle so you can tactically switch characters during missions to take advantage of their skills. Along with your warrior's class, you can outfit them with unique weapons that can be fused together to form more powerful items. However, since your success in the game has more to do with how quickly you can jam on the controller than with your warriors' equipment, the fusion system ends up being a footnote feature.

Concerned entirely too much with its repetitive action, Warriors Orochi leaves looks as a second priority. The game is far from ugly, but bumping up the resolution from PlayStation 2 iterations of the franchises and throwing in a few sparkly effects doesn't equate to a dazzling next-generation experience. Absolutely atrocious voice acting and an out-of-context techno soundtrack are fitting accompaniments to the underwhelming presentation.